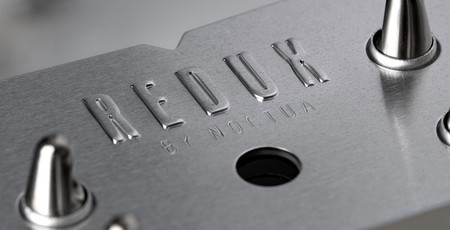 On Saturday, cooling specialist Noctua started to tease a completely new range of CPU coolers. This is big news for PC enthusiasts, as over recent years CPU air cooling has seen glacial progress, with most competitors having optimised their designs years ago. Furthermore, Noctua designs might have been a bit of a financial stretch for some when deciding how to allocate funds for a build. The newly teased 'Redux' line might therefore shake things up a bit.

Noctua describes its Redux product(s) as "An award-winning, proven CPU cooler, reduced to the essentials. #comingsoon #noctua #redux". There is a small accompanying picture which shows the top of a tower-style CPU cooler. In the image you can see heat pipes poking through the top, flanking the new branding 'Redux by Noctua', but the image is cropped so that there may be further heat pips not shown in the shot. The symmetry make it looks like there will be eight heat pipe ends if we could see the full top of the cooler - for four heatpipes threaded through a finned aluminium cooling block. On one face of the tower cooler is a Noctua branded fan. This looks the same colour as one of Noctua's existing Redux NF branded fans, a line which costs 30 to 40 per cent less than the standard Noctua NF fan range - perhaps providing a clue to the price reduction the Redux CPU coolers will deliver.

Currently, popular CPU air coolers from Noctua, like the NH-U12 or NH-D14 cost about £55 and £70, respectively. If Redux versions can push these prices down to £35 and £45, respectively, without significant compromise, Noctua could tempt a new army of fans, who would normally by default opt for a Cooler Master or Arctic model priced in this accessible - essential upgrade from stock - budget region.

Of course, the proof of the pudding is in the eating, and we eagerly await some Redux by Noctua products to test against rivals and earlier Noctua releases. While you are here it is worth a read through Bit-Tech's previous Noctua CPU cooler reviews.