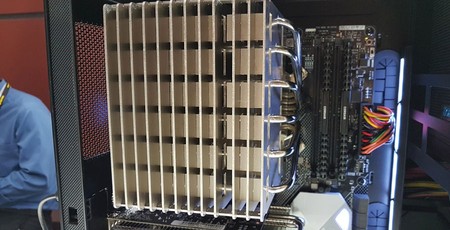 We were expecting to see the unnamed passive CPU cooler from Noctua launched and on shelves during Q1 this year. This expectation was firmed up by a report in December confirming that these weighty finned and heat pipe threaded constructions were about to enter mass-production.

Those of you impatiently listening to fans whirring, while Noctua seemingly bides its time in releasing its fanless wonder, shouldn't have much longer to wait. In answer to a Fanless Tech Tweet, Noctua has said that its unnamed passive CPU cooler is going to arrive "very soon". Thankfully the commonly accepted interpretation of 'very soon' is much narrower than of soon. Some insight into the process of designing the passive CPU cooler was recently provided in an interview featuring Noctua's marketing and PR executive, Jakob Dellinger. The exec told Relaxed Tech that its heatsink and heatpipe technology couldn't just be ported over to a fanless solution and the firm had to make an important decision on committing to new machinery for this line – obviously something to be pondered over very carefully. Additionally, we have Noctua's self-confessed "very strict policy of not realising anything that we aren’t 100% happy with". All these factors were detrimental to the road-map schedule for the completely new product.
To recap on the specs we know, this fanless CPU cooler is touted as being good for CPUs up to 120W, or 180W with quiet case fans present. It has an asymmetric design to aid with PCIe clearance and RAM stick clearance. Expect this product to cost US$100 or more.

Below is the Q&A section on the topic of Noctua's passive CPU cooler:

[RelaxedTech]: "Why would someone buy a fanless CPU cooler when they can run the NH-D15 with very low RPM speeds?"

[Jakob Dellinger]: "The key challenge is that for a passive cooler to be truly effective, design parameters such as fin pitch and fin thickness need to be quite different. You need a certain pitch to get low enough flow resistance for sufficient natural convection and a certain fin thickness in order to get the mass that is required for absorbing enough thermal energy. This means that different manufacturing machinery is required, e.g. much stronger stamping presses, etc. Getting this sorted in a reasonably cost-efficient way was quite a challenge. As for how big the market for this type of cooler is, we’ll actually have to wait and see. We found the technical possibility thrilling and hope that many customers will share this feeling. There’s a certain beauty and simplicity to going completely fanless rather than just running slow fans, there’s no real possible point of failure, less dust build-up, and of course, the bliss of complete silence."