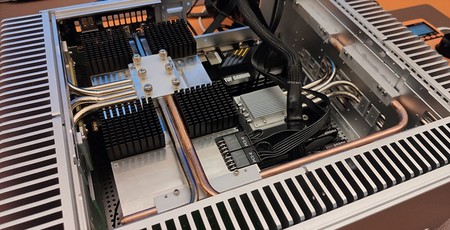 What are the limits of a passively cooled desktop PC in 2021, with regard to component choices? According to Turemetal, its "ultimate fanless case," the UP10, is capable of handling an "EATX full-size motherboard, 140W CPU, and 160W GPU" (total of about 300W+, when pushed). However, that hasn't stopped the Turemetal head honcho, Mical Wong, testing a PC featuring both an AMD Ryzen 5 5600X CPU (65W) and an Nvidia GeForce RTX 3080 graphics card (320W) in the UP10. A meter reading shows the system as a whole was consuming about 410W during benchmarking.

With the above GPU alone seemingly enough of a power hog to overwhelm the UP10 when under strain, Wong's tests ran remarkably smoothly. He ran Furmark for a few minutes, a bench test app that is notorious for heating up GPUs, and over the course of his test the GPU temperature went up from 18°C to a piping hot 87°C. Unfortunately, Wong stopped the test at a point before the temperature curve flattened out and stabilised. Looking at the curve, perhaps it would have added another 10°C before reaching equilibrium, it is hard to say. A number of observations are worth highlighting if thinking about the viability of an RTX 3080 packing UP10 for practical use. First of all it is notable that the ambient temperature of the testing space (in Shanghai?) was under 14°C. That is quite chilly for an office, studio, or gaming den (though it might warm up soon-ish using this system in a closed room). Secondly, you can see the Furmark tests barely hit the CPU. Something like a modern demanding AAA game might have pushed the system in a more balanced fashion with both CPU and GPU racing along – before thermal throttling along. You can see that Wong even kept the PSU outside the chassis to perhaps give this test more chance of 'success'. It is perhaps surprising that Wong didn't indulge in some power optimisation of the GPU, trying some underclocking perhaps, like GPU miners do, to find a sweet spot for power/performance. This kind of tinkering and using related techniques such as undervolting could have paid dividends, but Wong still managed to quickly show potential for the UP10. From the official pages and specs it looks more practical to pair the UP10 with a 200W GPU though, something like a GeForce RTX 3060 Ti.

Picking up a UP10 is going to require shipping from China and an outlay of approx US$800. So, just like the RTX 3080, it is definitely a considered rather than an impulse purchase.