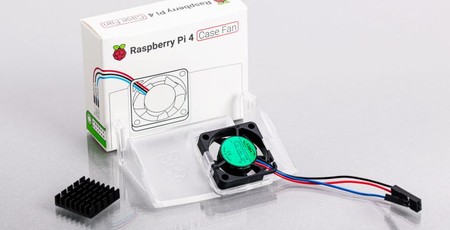 The Raspberry Pi Organisation has launched a 'stocking filler' aimed at new Raspberry Pi 4 owners using the official case. The Raspberry Pi 4 Case Fan is, as its name implies, a cooling product, and it is claimed to keep your Pi 4 cool "even when running the heaviest workloads, at the most aggressive overclocks."

Raspi founder and CEO Eben Upton explains that while the Pi 4 can run passively in an entirely acceptable manner, for some users an active cooling system will be a must. "Along with most fanless products – like most mobile phones – Raspberry Pi 4 was originally designed to operate in a 'sprint-and-recover' mode," wrote Upton on the RasPi blog. "If run at maximum performance for an extended period it would heat up, and eventually throttle back to limit its temperature."

If you watch the video above you can see that the cooler kit comes with both a heatsink and fan. The heatsink has a thermal adhesive pad already applied, so is a simple peel and stick job. Meanwhile the fan unit is designed to click into place in the lid of the official RasPi 4 case, with 5V power from the GPIO providing enough juice to create 1.4CFM airflow.

In some supplementary specs, the fan is said to be "low noise" with a lifespan of around 30,000 hours, and with PWM control possible via the GPIO (blue wire) and raspi-config. On Wednesday, case and cooler designer Gordon Hollingsworth will be publishing a blog about the design process.