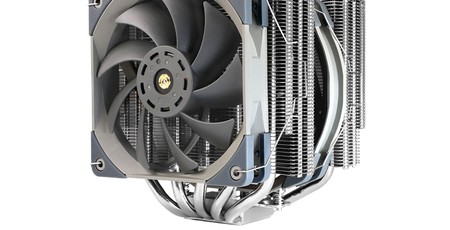 Thermalright has taken the wraps off the Frost Commander 140. This is a large air cooler featuring twin stacks of (53) aluminium fins, laced with five meaty 8mm nickel plated copper heat pipes. As is usual with this combo the heat pipes pass through the pure copper nickel plated cooler base making direct contact with the CPU heat spreader. The Thermalright Frost Commander 140 probably gets part of its name from the 140mm fan sandwiched between the twin aluminium fin stacks. On one side, a 120mm fan pushes air through the first stack towards the central fan. This is but one default option with the Frost Commander 140 as buyers will receive enough mounting clips to build it up into as much as a 3x 140mm cooling concoction. In all the specs shared Thermalright seems to have omitted the thermal performance, so I don't have the max processor TDP supported, however Thermalright is positioning it as an AiO CPU cooler rival. Pricing hasn't yet been revealed.