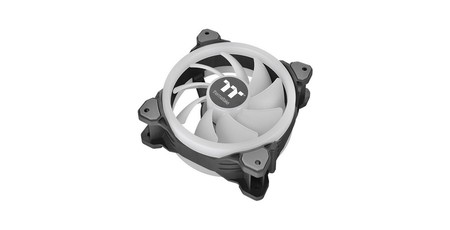 Cooling expert Thermaltake has announced the next logical progression from RGB-all-the-things: Fans which link to Amazon's Alexa voice assistant service..

At their heart, Thermaltake's new Riing Trio 12 RGB fans are more or less what you'd expect: 120mm nine-blade fans with pulse-width modulation (PWM) speed control and an impressive array of 30 individually addressable LEDs - 12 in the front, six in the middle, and another 12 in the rear - supporting the usual 16.8 million colour options. Each fan includes a low-noise hydraulic bearing system and an anti-vibration mount built directly into the injection moulding and offering a claimed 80 percent protection across all four corners.

Where things get a little stranger is in the software support: The company's TT RGB Plus application is to be upgraded later this year to include support for both direct voice control via the Thermaltake AI Voice Control app for Android and iOS mobile devices and to link up with Amazon's Alexa voice-activated assistant service. The latter, the company boasts, will allow Alexa users to synchronise the lighting or fan speed with external data, including weather information, using a natural-language command.

The triple-pack of fans, which includes a bundled lighting controller under the branding Riing Trio 12 RGB Radiator Fan TT Premium Edition , has not yet received a UK launch date or price. More information is, however, available on the company's official product page.