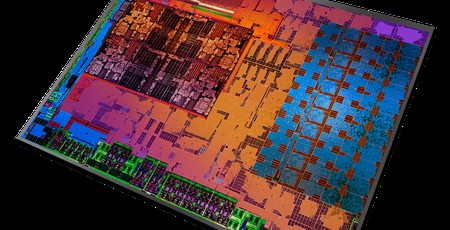 AMD has today announced two new processors for mobile products that merge Zen CPU cores with Vega graphics cores for the first time: the Ryzen 7 2700U and Ryzen 5 2500U.

Officially named the Ryzen Processor with Radeon Vega Graphics, the new chip is boldly described by AMD as the world’s fastest processor for ultra-thin notebooks, which translates to it being faster than any competing product within a 15W TDP, including Intel’s latest and greatest eight-generation Core part, the Core i7-8550U.

The flagship Ryzen 7 2700U offers a single Ryzen CPU Complex (CCX), giving you four cores and eight threads courtesy of Simultaneous Multi-Threading, and this is paired with 10 Radeon RX Vega Compute Units (CUs) for a total of 640 cores. The CPU portion has a base frequency of 2.2GHz and peak boost clock of 3.8GHz, while the GPU runs at up to 1,300MHz. The Ryzen 5 2500U, meanwhile, offers the same CPU cores running at 2.0GHz base and 3.6GHz boost alongside eight CUs (512 cores) at up to 1,100MHz. Both are rated as 15W parts but have a configurable TDP of between 9W and 25W, and both support dual-channel DDR4 memory at speeds of up to 2,400MHz. 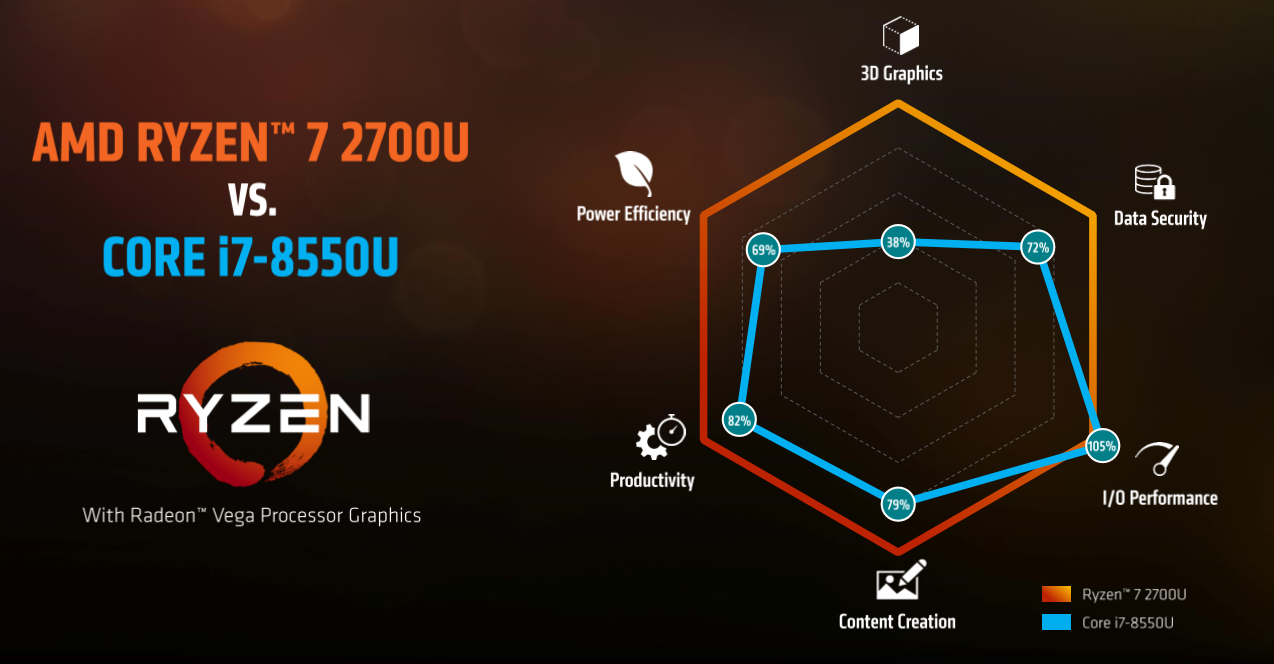 As you’d expect, AMD is promising massive performance and efficiency increases versus its own seventh-generation Bristol Ridge APUs, but of course the main competition will be from Intel. On this front, AMD admits that Intel has the upper hand in single-threaded performance, but claims it leads the way in multi-threaded CPU tasks and is way ahead on the gaming front as well. Perhaps the boldest claim is that the new Ryzen 7 2700U offers more performance in Cinebench than the Intel Core i5-7600K, a 91W desktop CPU. Meanwhile, for gaming, AMD reckons it can hit average frame rates of between 30fps and 60fps in the most popular esports titles (depending on settings and resolution, of course).

Precision Boost 2 is AMD’s means of dynamically altering CPU clock speeds based on CPU temperature, current, and load, and it’s been improved over the original with an algorithm that is more opportunistic and ramps down slower as thread count increases, though granularity is still fixed at 25MHz steps. Meanwhile, Extended Frequency Response (XFR) returns in mobile form (mXFR), and is automatically activated in notebooks that have adequate thermal solutions to permit boosting beyond the rated boost speed, though the actual maximum headroom has not been specified.

On the power front, the CPU and GPU portions now both share a single power rail that comprises an off-motherboard voltage regulator at step one and an on-chip regulator at step two followed by multiple digital low-dropout regulators throughout the CPU and GPU areas, with the end result being a reducing in maximum current demands of 36 percent. The new parts also feature per-core voltage/frequency settings (the GPU in this case treated as a whole “core”), with AMD able to divert power to more demanding threads as necessary. Power gate states have been enhanced with a drive to lower power consumption too.

Tying everything together is AMD’s Infinity Fabric, a control and data layer introduced with the Ryzen desktop chips and utilised in Vega as well. In these new mobile chips, it services not just the CPU and GPU, but the multimedia engine, the I/O, the display engine, and the DDR4 memory controllers too, allowing for efficient control of and communication between all elements. It is responsible also for faster exiting from low-power states and regional power gating.

As a result of all these power-based optimisations, AMD is claiming an up to 2x improvement in battery life, with figures ranging from nine to 13 hours for common tasks – a lot will depend on how each notebook is configured, of course.

The Ryzen Processor with Radeon Vega Graphics adopts the latest decode, encode, and display features from AMD, including H.265 encode at up to 4K/30fps, FreeSync (both internal and external), and HDR support.

For actual products, AMD is also announcing three key systems today with availability set for this holiday season but has claimed that it expects a big ramp up in units shipping with the Ryzen APUs in 2018. Details of the three models can be seen in the slides below; pricing is yet to be confirmed.