Intel has officially launched its next-generation Kaby Lake microarchitecture, beginning with low-power parts for laptops, tablets, and two-in-ones, and with desktop parts to follow in January 2017.

Part of Intel's revamped three-stage development cycle, which replaces its classic tick-tock cycle, Kaby Lake comes with a tweaked 14nm manufacturing node the company refers to as 14nm+. In 14nm+, Intel claims, it has been able to boost the final processors' performance by 12 percent over its previous 14nm node thanks to improved fin profiles on its tri-gate transistors, improved transistor channel strain, and heavy integration between its design and manufacturing divisions - the latter a none-too-subtle dig at companies like AMD who farm production out to third-party companies.

As you might expect from a process node tweak and microarchitecture improvements, performance gains are modest but measurable: Intel claims the 15W Core i7-7500U Kaby Lake chip is some 12 percent faster in the SYSmark 2014 benchmark than the i7-6500U it replaces, thanks largely to a 3.5GHz peak clock over 3.1GHz, and 19 percent faster in the WebXPRT 2015 benchmark.

In addition to improvements in the CPU portion of Kaby Lake, the integrated graphics processor has also received some love. Compared to the previous generation, Intel claims that the integration of new VP9 and High-Efficiency Video Codec (HEVC) 10-bit decode engines allow for Ultra HD video streaming in either codec without impacting battery life - indeed, for selected laptops, Intel claims 'All Day 4K' streaming for nine and a half hours will be possible. 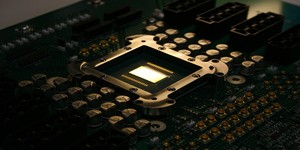