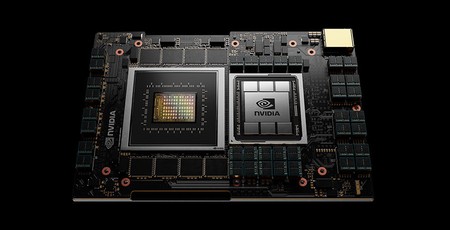 Nvidia's GTC21 kicked off yesterday and there have already been three pages of blog posts uploaded on the Nvidia news site about revelations from the show. Many of the innovations highlighted on that blog are for automotive, data centre, and the supercomputer industries – rather than PCs or games consoles, but some tech will undoubtedly drip down to consumer platforms.

During his keynote, Nvidia CEO Jensen Huang seemed particularly pleased to announce that Nvidia was now a 'three chips company'. Of course Nvidia is best known for its GPUs, but yesterday it introduced a roadmap showing regular progression goals in not just GPUs but in DPUs (data processing units) and CPUs. Between now and 2025 we are going to see this triple fork advance with Nvidia developing the Ampere GPU, BlueField DPU, and Grace CPU architectures. I already mentioned that none of these GPU, DPU or CPU developments were targeting PCs or consoles, but specifically the Grace CPU is aimed at data centres. In this segment, Nvidia says that a Grace-based system will "deliver 10x faster performance than today’s state-of-the-art NVIDIA DGX-based systems," which run on x86 CPUs.

Grace has the following key features:

It is too early for Nvidia to provide CPU design specifics such as core counts and clocks but from the renders shared it looks like Grace will feature approx 80 CPU cores. Grace already has some significant supercomputer design wins.

Grace-Next cores will not just be data centre bound but will feature in the impressive upcoming Nvidia Drive Atlan SoC, pictured below. This powerful processor is likened to a "data centre on wheels," and folds a vehicle's entire compute infrastructure into a single SoC. The image above gives you an overview of the Atlan SoC's components and this next-gen platform is touted to "achieve an unprecedented 1,000 trillion operations per second (TOPS) of performance and an estimated SPECint score of more than 100 (SPECrate2017_int)," which is said to be "greater than the total compute in most robotaxis today".

Nvidia's last CPU family, the Tegra, found a way into various consoles, tablets and other smart devices. One wonders what future consumer gems will feature Grace, or Grace-Next.