Nvidia has announced the Jetson TX2 computer-on-module (COM), featuring its Tegra X2 Parker system-on-chip (SoC) processor and a claimed performance double that of its predecessor the Jetson TX1.

Better known for its graphics cards and a by-and-large failure to make a dent in the mobile market with its Tegra SoC family, Nvidia's push into the embedded and automotive markets began with the release of the Jetson K1 single-board computer (SBC) back in March 2014. Priced at $192 in the US, both to appeal to hobbyist developers with limited budgets and as a nod to its 192 CUDA processing cores, the Jetson K1 was replaced a year later by the Jetson TX1 COM, boasting a 256-core Maxwell graphics processor though at a far higher price level of $599 bundled with breakout board.

Now, the company has boosted the performance of the board still further with the launch of the Jetson TX2. Built to the same footprint as its predecessor, the Jetson TX2 replaces the 256 Maxwell CUDA cores with an equal number of Pascal-based cores for boosted performance. The CPU side has also been overhauled, with the quad-core ARM Cortex-A57 of its predecessor now being joined by a dual-core implementation of Nvidia's own Denver 2 ARMv8 cores in a Heterogeneous Multi-Processor (HMP) layout. RAM, too, has been increased to 8GB of LPDDR4 running at 58.3GB/s throughput, from 4GB running at 25.6GB/s on the TX1.

To make use of all that power, Nvidia bundles the board with a customised Ubuntu Linux operating system dubbed Linux for Tegra and a software development kit (SDK) with a range of tools for artificial intelligence and deep learning projects including the TensorRT neural network inference engine, cuDNN for hardware-accelerated deep learning networks, VisionWorks for computer vision projects, and support for OpenGL 4.5, OpenGL ES 3.2, EGL 1.4, Vulkan 1.0, and CUDA 8.

The Jetson TX2 is due to launch later this month, priced at $599 with breakout board in the US. More information is available on Nvidia's official microsite. 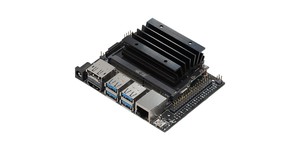 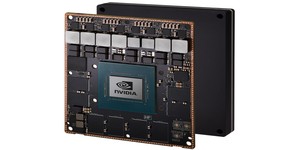