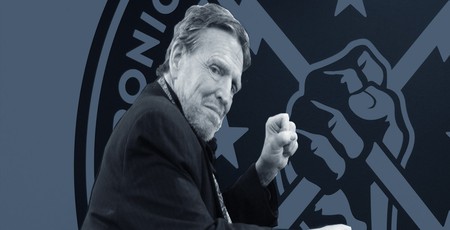 While readers of a certain age will know John Perry Barlow from his contributions to the Grateful Dead and counterculture in general, it was in 1986 that the lyricist, poet, and essayist would turn his attention to technology. Having joined the Whole Earth 'Lectronic Link - one of the original virtual communities, founded by Stewart Brand and Larry Brilliant as a bulletin board system (BBS) follow-up to Brand's Whole Earth Catalog publication - Barlow would become convinced in the future of communications lying with virtual communities on the internet, and in 1990 founded the Electronic Frontier Foundation (EFF) with fellow activists John Gilmore and Mitch Kapor as a means of defending rights in the digital realm. Barlow's vision is best and most famously laid out in his essay A Declaration of the Independence of Cyberspace.

'With a broken heart I have to announce that EFF's founder, visionary, and our ongoing inspiration, John Perry Barlow, passed away quietly in his sleep this morning. We will miss Barlow and his wisdom for decades to come, and he will always be an integral part of EFF,' wrote Cindy Cohn in the organisation's announcement of its founder's passing. 'It is no exaggeration to say that major parts of the Internet we all know and love today exist and thrive because of Barlow’s vision and leadership. He always saw the Internet as a fundamental place of freedom, where voices long silenced can find an audience and people can connect with others regardless of physical distance.

'Barlow was sometimes held up as a straw man for a kind of naive techno-utopianism that believed that the Internet could solve all of humanity's problems without causing any more. As someone who spent the past 27 years working with him at EFF, I can say that nothing could be further from the truth. Barlow knew that new technology could create and empower evil as much as it could create and empower good. He made a conscious decision to focus on the latter: "I knew it’s also true that a good way to invent the future is to predict it. So I predicted Utopia, hoping to give Liberty a running start before the laws of [Intel co-founder Gordon] Moore and [Ethernet co-inventor Robert] Metcalfe delivered up what Ed Snowden now correctly calls 'turn-key totalitarianism.'"'

Barlow had been unwell for some time, suffering a heart attack in May 2015 which left him with extremely compromised mobility. He is survived by three biological daughters and a surrogate daughter.

Gets some industry support, too.