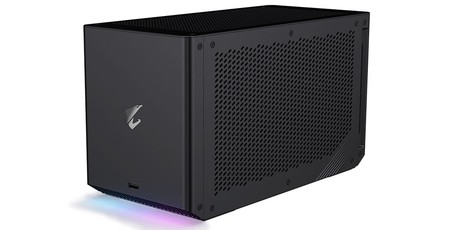 Gigabyte has quietly launched a 2021 update to its Aorus Gaming Box and one of the first examples listed comes packing a water cooled Nvidia GeForce RTX 3080 Ti. The comparatively recently released RTX 3080 Ti is probably a good choice for such a product, as recent reports show this is a GPU with decent supply – albeit at unattractive prices for the value-minded. Most of you will have grasped from the name/pictures that the Aorus Gaming Box is an external GPU product, and Gigabyte is covering all the bases by describing its utility value in gaming, content creation, and even GPU-accelerated artificial intelligence and machine learning.

Starting on the outside, the 2021 Aorus Gaming Box measures 300 x 140 x 173mm, and weighs in at just under 4kg populated with the water cooled GPU. Connections to the box can be made via Thunderbolt 3 type-C x1 with power delivery support (to charge your attached laptop), Ethernet port x1, USB 3.0 x3, and video output is covered by the HDMI x2 and DP x3 ports, and you can connect up to four displays simultaneously. The box is quite minimal in design, but has a dash of aRGB LED lighting for those inclined to take advantage of it. Inside, the main attraction is the water-cooled RTX 3080 Ti, which Gigabyte says is a 'Gigabyte WaterForce GeForce RTX 3080 Ti 12G', despite this being an Aorus branded product. Its key performance specs are a GPU clock of 1,665MHz, and a memory clock of 19,000MHz, providing an effective 912GB/s with its 12GB of GDDR6X RAM.

Another major component inside the box is a 550W PSU with 90 per cent efficiency (equal to 80 plus Gold), from where sprout the requisite PCI 8pin + 8pin power connectors. Buyers get a Thunderbolt 3 cable 500mm (USB Type-C) and power cord for the unit in the box, as well as a carry back and quick guide. We don't have pricing or availability at the time of writing. These boxes used to cost from £200 to £400 more than the graphics cards they contained, so please adjust your pricing expectations accordingly. Also, please remember that the full potential of a GPU like the RTX 3080 Ti will be held back by the Thunderbolt 3 interface.