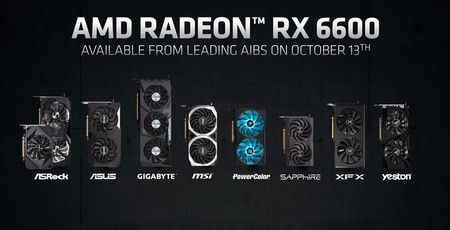 At the end of July we saw AMD launch its Radeon RX 6600 XT graphics card, "designed to deliver the ultimate high-framerate, high-fidelity and highly responsive 1080p gaming experience." It has now followed up with the widely leaked and predicted Radeon RX 6600 graphics card to "provide visually stunning, high-refresh rate 1080p gaming experiences to the midrange market". It is worth talking about the Radeon RX 6600 and XT together as they are built upon the same Navi 23 RDNA2 GPU, but with the new cheaper sibling being subject to a few cuts. The $50 difference in MSRP when comparing the Radeon RX 6600 and XT is about 15 per cent, and you will get a proportional reduction in streaming processors and texture units at your disposal for the lower fee (though ROPS remain at 64). However, this isn't all, as the cheaper graphics card has slower GPU boost, game, and memory clocks (14 vs 16Gbps), too.

Overall, the result is, as indicated by the AMD quotes in the intro – the new Radeon RX 6600 is great at modern 1080p gaming at moderately fast refresh rates (and is described as "future ready" in this respect).

Looking through the oodles of third-party benchmarks and comparisons of new partner-made Radeon RX 6600 graphics cards published over recent hours, it becomes quite clear that the RX 6600 (132W) is a very good match for the Nvidia GeForce RTX 3060 (170W) which has the same MSRP. As usual, the green team product is favoured by certain games / engines, while the red team has its own highlights, but on balance they are a pretty good match. Sometimes, depending on the game, the ray tracing performance of the new AMD card is acceptable too, but it will often need a helping hand from FSR, if available. Consumers don't get to enjoy the luxury of choice as much as they used to with graphics cards, to say the least, but if you do see the Radeon RX 6600 at an acceptable near MSRP you might be pleased with the performance if you are only looking for a fast 1080p, or entry-level 1440p, experience (depending on game). One of the more pleasing aspects of the new GPU is its power efficiency. It struts its stuff at 132W, so will mean that it should be easy to cool and run quietly. However, at this time it looks like partners have kept development costs low by recycling RX 6600 XT (160W) designs, so the lineup of partner cards is bristling with bulky triple and dual-fan examples.

AMD Radeon RX 6600 graphics cards are expected to be available from AMD board partners including ASRock, Asus, Gigabyte, MSI, PowerColor, Sapphire, XFX and Yeston. I hope you can find stock in your region at a reasonable price, if interested. Pre-built PCs using these cards should start to appear too. With AMD launching this GPU, there is renewed chitter-chatter about Nvidia rolling out the GeForce RTX 3050/Ti series for the desktop. These might come with improved VRAM quotas on the desktop too, according to rumours of 6/12GB GDDR6 models in the pipeline