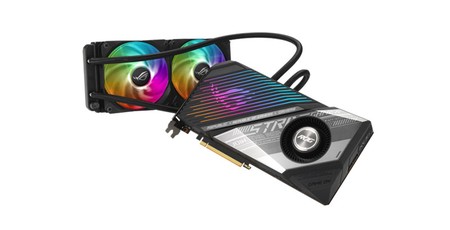 Asus has taken the wraps off its ROG Strix LC Radeon RX 6900 XT. The new graphics cards has been unveiled just days after the launch of AMD's top tier GPU of the RDNA 2 graphics cards series so far. With its liquid cooled GPU die and memory, and dedicated blower on the power-delivery components, as well as triple 8-pin power conenctors, you might expect monster GPU clocks from this card. However, at the time of writing Asus is keeping mum about such details of its custom designs.

The key features of the ROG Strix LC Radeon RX 6900 XT include a custom designed cold plate which extends beyond the GPU on all sides to cover the GDDR6 memory modules surrounding. This is said to bring the full benefits of the LCS to the components that are most responsible for your graphics card performance.

Added to that cooling block under the pump there is still a fan onboard, in the PCIe card's shroud. Asus has a dedicated blower style fan to disperse heat generated by the power delivery components. It says this jettisons hot air quietly and efficiently out the back of the PC. Meanwhile, at the other end of the 600mm LCS tubing there is a 240mm radiator with twin 120mm fans, which Asus says are optimised for high CFM and static pressure. RGB aficionados may be pleased to hear that aRGB lighting is present on both the radiator fans, and the shroud/logo on the graphics card side. As usual this can be controlled with Asus Aura Sync, with various modes and sync schemes.

Expect to pay way over the reference card's US$999 RRP for this graphics card when it becomes available. Sadly we don't have any confirmed out of the box GPU clocks, availability, or pricing at this time.