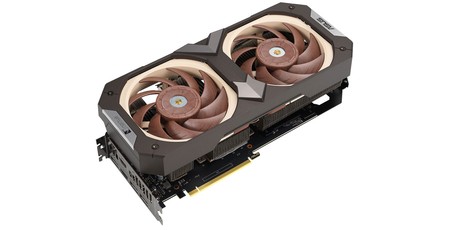 A few hours ago, Asus and Noctua revealed details about their first offspring. Bit-Tech reported on the apparent slip-up reveal of this collaboration by Asus Vietnam last week, and now it is official we have all the tasty specs to check through, as well as some explanatory and descriptive texts from the firms involved.

Asus has two SKUs that it wants to sell you; the RTX3070-8G-NOCTUA, and the RTX3070-O8G-NOCTUA. If it isn't evident already from those codenames, one is factory overclocked and the other isn't. However, Noctua's chunky cooling solution is going to help you achieve some decent contemporary clock boosts, whichever you choose – depending on the silicon lottery etc too, of course. I'll talk about cooling later, but what we have here are basically Nvidia GeForce RTX 3070 LHR cards, with their standard features of 5,888 CUDA cores, 8GB of GDDR6 on a 256-bit bus running at 14Gbps. Asus has chosen to fit the following connectors: 2x HDMI 2.1 and 3x DP 1.4a ports, with twin 8-pin power connectors. You first start to get a feel of something out of the ordinary here when you look at the physical size of these new twin-fan graphics cards – they measure 310 x 147 x 87.5 mm (which is 4.3-slots thick). Noctua's blog provides some background on the special appeal of the Asus GeForce RTX 3070 Noctua (OC) Edition graphics cards. Unsurprisingly, it is all about the cooling. The bulky design comes from Noctua reworking a triple fan Asus TUF Gaming GeForce RTX 3070. Starting with this base, Noctua redesigned the heatsink for a twin fan setup, and applied its award-winning NF-A12x25 120mm units, which work with Asus 0dB fan stop tech when the graphics card is under light loads (GPU at 50°C or lower).

It is highlighted by Noctua that "measured side by side, the improvements of the Noctua Edition are substantial with a massive reduction in noise levels of up to 15dB(A)".  It backs up this claim with a series of charts comparing the new GPU with fans spinning at low, medium, and high RPMs.

"Customers have been asking us to create GPU cooling solutions for quite some time, so we're excited and honoured to team up with ASUS in order to make this happen. Using our NF-A12x25 fans and fine-tuning the heatsink for use with them, we've managed to achieve a significant boost in performance-to-noise efficiency," explained Roland Mossig (Noctua CEO).

Noctua reminds potential buyers of these graphics cards that they will work best in well-thought-out, well-ventilated PC cases, where they will run silently or at extremely low noise levels, even in GPU-intensive tasks.

If you are interested in the Asus GeForce RTX 3070 Noctua (OC) Edition graphics cards, they are expected to hit the market in mid-October. Around launch might be the best chance to grab one, depending on where you live. I don't have any pricing indicators.