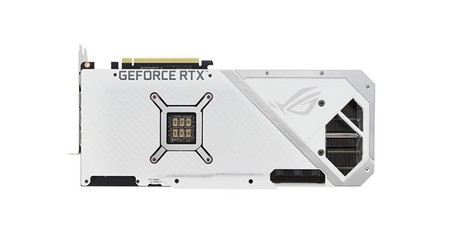 Asus has readied a trio of ROG Strix GeForce RX 30 Series graphics cards, aiming to please those who have, or aim to create, an all-white PC build. The new models are based upon the existing ROG Strix RTX3090 O24G, the ROG Strix RTX3080 O10G, and the ROG Strix RTX3070 O8G designs and are currently only found in Denmark's Proshop, (with non-OC variants too, so six models in all) but I guess they will be distributed/announced as available more widely soon enough. You probably aren't expecting any performance spec changes here and if so you are correct. The Asus Strix range already provides decent overclocks compared to reference and sturdy capable cooling, so there isn't anything to be concerned about under the shroud.

Returning to the subject of these graphics cards' appearance, as well as the bright white shroud these designs feature white fans – and a white backplate. So, no corners were cut for the sake of the overall look, unless you were expecting a white PCB... Don't forget the ROG Strix range has integrated aRGB lighting too.

Pondering over the Proshop pricing, the RTX 3090 ROG Strix White OC (for example) is listed at 15,290 Krona, while the previously launched black equivalent is 14.490 Krona – that's nearly £100 difference just to buy the white model. Not surprisingly though, at the time of writing, there are no models in stock, in either black or white.