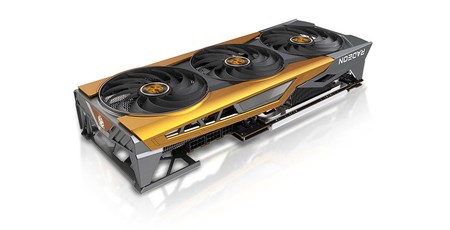 On Monday there were headlines heralding signs of the "fastest Big Navi 21 GPU-based graphics card," on the way from AMD, a new product which would tip the scales to "surpass Nvidia's GeForce RTX 3090". However, more sober sources are pouring cold water on such reports, as are other seasoned Twitter hardware leakers. So please don't get your hopes up if you read about the revamped AMD Radeon RX 6900 XTX Graphics Card with 18Gbps GDDR6 memory in the last few hours.

The rumours started with Twitter tech fan CyberPunkCat sharing what appears to be an online presentation slide. The image shows official looking AMD Radeon branding with mixed English and Chinese, and one can clearly read "6900 XTX… 18Gbps – 24.93 TFLOPS FP32". WCCF Tech quickly picked up on this Tweet and put together a report heralding the impending arrival of the "fastest Big Navi 21 GPU-based graphics card, the Radeon RX 6900 XTX". The site did actually put the word 'rumoured' in its headline, though. As the dust from the publishing of this slide settled, tough, the tweet and linked follow-up report seem to lack backing from other reliable AMD news sources.

Standing in the Radeon RX 6900 XTX sceptics corner are the likes of Greymon55 from Twitter, who specialises in AMD leaks, and the AIB sources that frequently tip-off tech site VideoCardz.

If you remember back to just a few months ago, AMD and partners already launched Navi 21 XTXH GPU packing graphics cards with air coolers; the ASRock OC Formula, Power Red Devil Ultimate series, or Sapphire’s Toxic Air-Cooled. Meanwhile, some RX 6900 XT cards already come with up to 18Gbps memory upgrades – a small selection of OEM and system integrator models with AiO coolers equipped. This is apparently the way AMD and its partners decided to advance, and there are no signs saying otherwise at this time, say the sceptics.

In summary, it is hard to know whether there will be a new AMD Radeon RX 6900 XT variant launched for consumers in the coming weeks or months, there is a possibility that AMD is preparing a response to Nvidia's 'Super' cards, but this doesn't look a likely candidate.