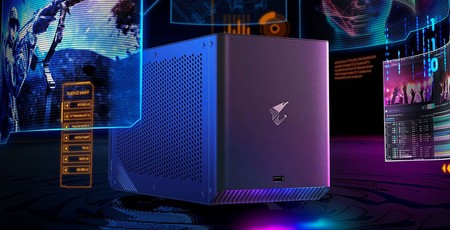 Gigabyte has announced what it claims to be "the world’s 1st water-cooling external graphics". The new Aorus RTX 3090/3080 Gaming Box contains your choice of the titular Ampere graphics cards plus powerful cooling courtesy of the Aorus WaterForce system. Those making use of the new Aorus RTX 3090/3080 Gaming Box will typically be laptop or SSF users who wouldn't be able upgrade or fit one of these hulking graphics cards inside their systems. It requires a Thunderbolt 3 connection and currently these eGPUs aren't compatible with Apple Macs based upon the M1 processor. The Aorus RTX 3090/3080 Gaming Box includes the WaterForce AiO cooling system. This is a self enclosed zero maintenance water cooling system which provides high performance processor cooling with low noise. Gigabyte says that the WaterForce integrates a large copper plate, with an optimised pump and block, tubed to a 240mm radiator with twin 120mm fans. The WaterForce cooling keeps not just the GPU cool but the video memory and MOSFETs - for a stable high performance solution.

The low key styling of the Aorus RTX 3090/3080 Gaming Box will appeal to both gamers and creators, thinks Gigabyte. For the former the option to install the Aorus Engine and turn on the RGB Fusion 2.0 lighting will probably appeal the most.

As well as providing accelerated processing these Thunderbolt 3 attached devices also include a useful set of ports so they double up as a dock; three DisplayPorts, two HDMI connections, a Gigabit Ethernet port, two USB 3.0 Type-A ports, and a USB 2.0 Type-A port. The boxes contain their own 450- 550W PSUs. Measurements of the Aorus Gaming Box are 300 x 140 x 170mm and, depending upon the graphics card, it weighs approx 3.8kg.