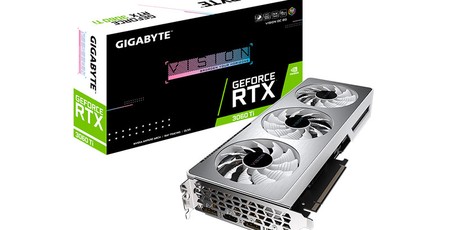 Gigabyte has added an overclocked RTX 3060 Ti graphics card to its content-creator targeted Vision series. The new Gigabyte GeForce RTX 3060 Ti Vision OC 8G looks similar to its RTX 3080 (3-slot) and 3070 (2.7-slot) siblings but thanks to the reduced TDP it has been possible to compress it into a 2-slot design (card dimensions: 281 × 115 × 40mm). Like its bigger brothers though as it still uses a WindForce 3X cooler with triple alternate spinning 80mm 3D blade fans and five composite copper direct-touch heatpipes - to keep its OC GPU ticking along smoothly. Many will be familiar with the Gigabyte Vision series looks – it is finished in white and silver. However it offers more than just an alternate lick of paint. The cooling structure is graphene reinforced for example. Complementing the looks is a metal backplate which has a sizable cutout allowing pair to pass through, as well as providing structural support.

Other nice features are the 3D Active Fan which offers semi passive cooling with fans remaining off when the GPU is under low load, under a certain temperature. Gigabyte has used graphere nano lubricated fans for quiet durability too. RGB Fusion 2.0 RGB lighting is present and offers the usual array of lighting modes and effects. Perhaps more useful in this 'serious' productivity graphics card are the LED power indicators on the 8- and 6-pin connectors which will flash in case of any 'power supply abnormality'.

As for performance, the default core clock of the Gigabyte GeForce RTX 3060 Ti Vision OC 8G is 1,755MHz, a decent increase on the 1,665MHz reference Further tweaks can be made using the Aorus Engine accessory software.

Pricing and availability are yet to be announced.