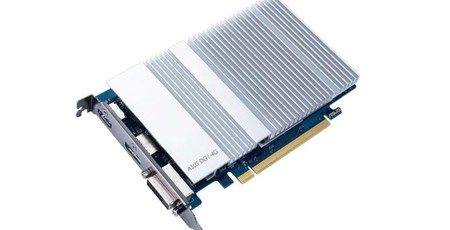 Intel Iris Xe desktop graphics cards are now being made and distributed by its board partners. Asus and Colorful have rustled up two very different looking designs based upon the Iris Xe (80 EUs), built on Intel's Xe-LP GPU architecture. These 25 to 30W PCIe 4.0 add-in-cards won't be distributed via retail channels but provided to OEMs and System Integrators designing systems for mainstream users and small- to medium-size businesses.

These Intel Iris Xe PCI cards have 80 EUs and 4GB of dedicated on-board LPDDR4X video memory. Moreover, as discrete add-in-cards, they could draw more power and feature much heftier cooling solutions than the mobile integrated versions. You can see the Asus design is a passive card with large finned heatsink covering the length of the card (top), but Colorful has strapped on a serious overkill twin fan solution (below). Due to the OEM/SI nature of this release we don't have specific availability dates for these graphics cards but expect them to show up in the “high-volume, value-desktop market," shortly.