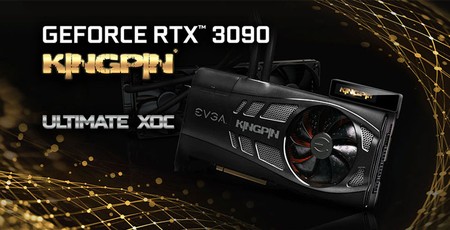 Overclocker Kingpin has taken a convincing lead in the 3DMark Port Royal benchmarking records table. Kingpin, AKA Vince Lucido, scored 34,263, which is over 1,000 points clear of second placed OGS, and over 1,700 points beyond the reach of third placed JayzTwoCents. The Port Royal charts are dominated by overclockers employing twin Nvidia GeForce RTX 3090 GPUs in SLI and of course these GPUs were central to the setup used by Kingpin. On social media EVGA and Vince Lucido shared the above graphic capturing the achievement. You can clearly see 3DMark Port Royal's results screen, various CPU-Z screens, and the EVGA Precision X1 software on the Windows desktop. Key details revealed by the screen shot include the following system specs:

The graphics cards were overclocked to 2,550MHz while cooled to -42C thanks to the liberal application of LN2. Remember that with the Nvidia Ampere consumer graphics series of graphics cards it is only the RTX 3090 models (so far) that work in SLI setups. Unfortunately there are no pictures available of the hardware from the OC and benchmarking session.