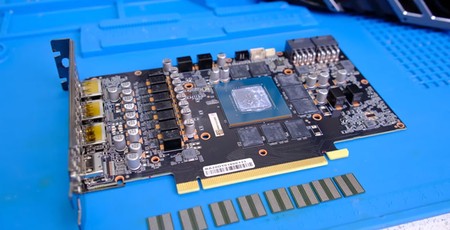 In January a YouTuber called VIK-On modified an Nvidia GeForce RTX 2070 to upgrade it from 8 to 16GB of VRAM. The project was a moderate success as the modded card seemed to suffer a significant performance drop, and there were various stability issues remaining even after protracted tinkering – but it 'worked'.

With the above experience it might be understandable if VIK-On didn't indulge in any more modding of rare and costly GPU hardware but possibly emboldened by the popularity of his video he is back to follow a similar cunning plan to upgrade an RTX 3070. I'm happy to report that this time around the mod seems much more successful and thus possibly worthwhile if the 8GB limit of your RTX 3070 really offends you, and you can shoulder the risk such a mod entails.

The key modification is the removal of the 1GB GDDR6 memory modules (K4Z803256C-HC14) and replacing them with 2GB GDDR6 ICs (K4ZAF3258M-HC14). Thus, it’s a straight swap operation, in this respect. However, as well as the memory IC heatgun and flux shenanigans –with precise replacement needed – VIK-On needed to change some resistors to get the card to recognise the quantity/brand of memory upgrade. If any of these electronic components was faulty or not perfectly soldered back in place then he could have been facing all sorts of issues. Actually VIK-On did face some crashing with his first tests using intense workloads but luckily his YouTube audience suggested an EVGA Precision X1 tuning software setting (preventing power-saving via auto undervolting and underclocking) that made the setup usable and stable. Since this tweak VIK-On has completed various demanding benchmarks like 3DMark Time Spy and Unigine Superposition with the results one might expect from an RTX 3070 – with 16GB VRAM – meaning this mod is largely a success.