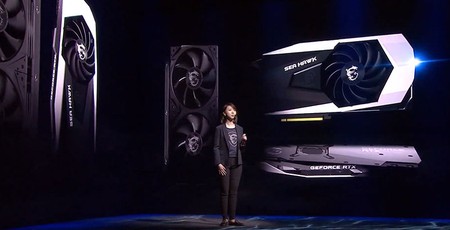 MSI has announced that it is readying GeForce RTX 30 series graphics cards with hybrid cooling. Yes the PCs and components firm is rekindling its SeaHawk line for Ampere GPUs. During its MSI Premiere 2021: Tech For the Future event at CES, the firm revealed the upcoming graphics card which features a 240mm radiator.

The SeaHawk graphics cards have been seen in previous generations, and they use a hybrid AiO cooler to squeeze great performance from the underlying GPU. MSI calls it "a revolutionary design with proven technology." With this generation MSI will be providing GeForce RTX 3080 and RTX 3090 graphics cards with SeaHawk cooling. It probably won't come lower in the stack due to cost/benefit calculations.

As you can see from the images the new SeaHawk features an air cooler on the PCI card and a flexi-tubing attached twin fan radiator. MSI says that this combined cooling system, air and closed loop liquid AiO is "efficient, silent and requires absolutely no maintenance".

For some background information, the custom cooling system uses an Asetek low-profile pump as its heart. The GPU-warmed liquid flows to a 240mm radiator featuring twin MSI Torx 4.0 120mm fans. This very effectively takes heat away from the cooling block which covers the GPU and VRAM chips. The third fan of the system, situated on the AIC is used to keep the card's VRMs cool.

All the fans used by the SeaHawk supports MSI Zero Frozr tech so will stop under light loads / low temperatures. We don't have availability or pricing data for the MSI GeForce RTX 30 SeaHawk series graphics cards, but one should expect high prices and limited availability for the foreseeable future.

Other niceties MSI launched at its event include; its Suprim graphics cards, its first SSDs, the CoreLiquid K360 CPU cooler, as well as a range of monitors, motherboards, and PC gaming accessories.