Nvidia has officially launched its most powerful GP102-based graphics card yet, the confusingly named Nvidia Titan Xp, but if you're looking to pick one up you'll be paying a whopping £1,200 for the privilege.

Designed to sit very firmly at the top end of the company's consumer-grade lineup - missing as it does the features of a pro-grade graphics card, such as ECC memory and non-nobbled double-precision floating point compute performance - the Nvidia Titan Xp is thus far the most powerful GP102-based graphics card the company has released. Its name, sadly, seems destined to confuse: Its immediate predecessor, the Titan X Pascal, is commonly though unofficially known as the Titan XP or Titan Xp to differentiate its architecture from the earlier and original Titan X that was built on the Maxwell architecture.

The new Titan Xp, not to be confused with the older Titan X Pascal, boasts some impressive specifications: The card includes a 12GB GDDR5X frame buffer with a throughput of 11.4 gigabits per second (Gb/s), the GP102 graphics processor has 3,840 active CUDA cores running at a boost clock of 1,582MHz - though, oddly, Nvidia isn't sharing the native clock - apiece, and overall the card offers a claimed 12 trillion floating-point operations per second (TFLOPS) of compute performance. Two-way SLI is supported should anyone fancy splashing out £2,400 on graphics cards. The card is claimed to max out at 250W. Oddly, the card includes the same 'Titan X' markings as its predecessor, with no 'p' suffix in sight - something that will doubtless do little to fix the naming confusion Nvidia has created.

While the Titan Xp is an undeniably impressive beast, it's the pricing which will raise the most eyebrows: Nvidia is asking a whopping £1,200 (inc VAT) per card, with a limit of two per customer. Full details, plus a link to order the card, are available on Nvidia's official product page. 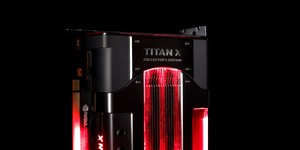