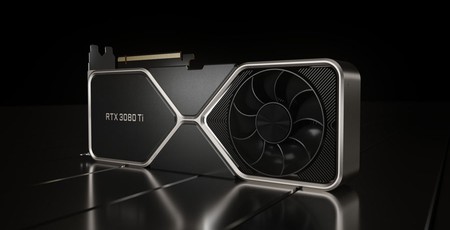 This morning at its live-streamed Computex 2021 trade show event, Nvidia unveiled the GeForce RTX 3080 Ti and RTX 3070 Ti. These latest Ampere graphics cards for consumers fit exactly where you would expect in the lineup (tech specs can be picked through below) and Nvidia provided some in-house gaming performance comparison results for those interested to ponder over to clarify performance expectations. Ahead of the third party reviews (in the coming days) you will have to put up with Nvidia's intergenerational comparisons, for now.

Before going further I'm going to highlight some important availability and MSRP data: the GeForce RTX 3080 Ti – Nvidia's "new gaming flagship" – is released on 3rd June, and the GeForce RTX 3070 Ti, releases on a week later, on 10th June. Thus, you won't have to wait eons for third party reviews and analysis. As well as Founders Edition cards from Nvidia, all the usual partners will be releasing custom and OC cards including the big names like Asus, EVGA, Gigabyte, and MSI. In case you haven't been keeping abreast with Nvidia GPU news, yes these will be Lite Hash Rate designs, which are designed to be unattractive choices for ETH miners. Above you can see the GeForce RTX 3080 Ti is touted as being a solution that is twice as fast as the GTX 1080 Ti in traditional rasterisation at 4K. Of course as the Pascal card lacks RTX technology it is completely crushed in ray tracing performance and its rendering performance now looks rather weak too. A further blow to the Pascal generation GPUs is that they don't support DLSS gaming tech, but AMD might be providing a lifeline there with its open-standard FSR technologies which launches in the first games on 22nd June.

Nvidia's new GeForce RTX 3070 Ti is described by Nvidia as a 'turbocharged' RTX 3070, which benefits from a worthwhile CUDA core count and super speed GDDR6X memory. Rather than provide the logical comparison against the RTX 3070, Nvidia here shows how well the new graphics card fares against previous gen equivalents – the GeForce RTX 2070 Super, and the GeForce GTX 1070 Ti. It is claimed that the RTX 3070 Ti is 1.5x and 2x faster than those GPUs, respectively. Alongside the hardware announcements Nvidia crowed about the adoption of its RTX tech such as ray tracing, DLSS, and Reflex. It says that over 130 apps and games now support these technologies and the list continues to grow. Highlighted new additions adding both ray tracing and DLSS include; The Ascent, DOOM Eternal, DYING: 1983, Icarus, LEGO Builder’s Journey and The Persistence. New games that are accelerating performance using DLSS include, Red Dead Redemption 2 and Rainbow Six Siege.

Nvidia also launched a new Fortnite map called Titanium City, a 12 player Gun Game multiplayer free for all. Play it by loading up Creative Mode in Fortnite and head to Map Code 1866-3511-4211.

Lastly, it was interesting to hear that Nvidia is working with Valve and the Linux community to bring DLSS to Proton. Support should arrive in Vulkan games starting this month, and DirectX titles from Autumn.