Nvidia has confirmed that it is going ahead with building a new headquarters in Santa Clara, California, after putting the project on hold in February last year.

Announced back in 2013, the triangular construction is to take up 500,000 square feet of prime real estate in Silicon Valley, within Santa Clara's business district. At the time, Nvidia called for two complementary buildings taking up a total of a million square feet, but its announcement this week has confirmed construction of only one of the two facilities.

'The design harmonises smart functionality and a shape that connects with and inspires our employees – a triangle, the fundamental building block of computer graphics,' Nvidia co-founder Jen-Hsun Huang wrote of the plan back in February 2013. 'Efficient in every way, the design is thoughtful in its use of space, energy, and environment, and, of course, cost.

'Its vast open floors will facilitate our cross-functional work. The nature of building our products requires experts from multiple disciplines to come together, and this building is designed above all for collaboration,' he added.

A year after its announcement, however, Nvidia put the brakes on the project, deciding instead to lease office space in a building near its existing headquarters. Since then, the company has been silent - until confirming that the project was back on-track in an interview with the Silicon Valley Business Journal this week. 'We are expanding our campus to support our growth businesses,' Nvidia's Hector Marinez told the paper. 'After working hard to optimise each aspect of the building’s design and cost, we are ready to move forward.'

Demolition is to begin within the next month, ahead of construction of one of the two planned buildings. The company has not yet confirmed whether it plans to stop the project at one, or create the originally-planned interlocked campus it announced two years ago. 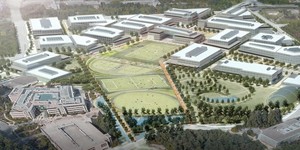 Also available as a conversion kit.