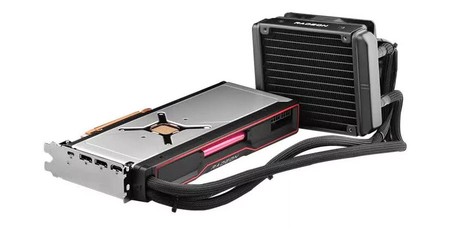 A mysterious graphics card with AiO liquid cooler has been listed on KaBuM, a Brazilian electronics retail site. This unannounced add-in-card is referred to as a Sapphire Radeon RX 6900 XT in the listing, but while it bears the Radeon logo prominently, there is no sign of Sapphire branding. Unfortunately, KaBuM has taken down the listing, but not before its text and images were saved by the likes of VideoCardz. A similar, if not identical AiO has been spotted in a Chinese pre-built system. In the image above you can see that this graphics card follows the same MO of previous reference designs from AMD, with its minimalist shroud with single 120mm fan/radiator attached by the braided reinforced circulation hoses. We can also clearly see the latest Radeon logo – the large stylized 'R' on both shroud and radiator assembly.

Specs in the listing pointed to the following:

The above specs match the Radeon RX 6900 XT reference design – except for the faster clock speeds here (both GPU and memory have been tweaked up). The combination of excellent cooling plus the rumoured pre-binned silicon that some refer to as the RX 6900 XTX will be instrumental in delivering the faster clocks and boosted performance. KaBuM had this card listed for release on 26th June, so it looks like we should look forward to an official announcement nearer to that date.