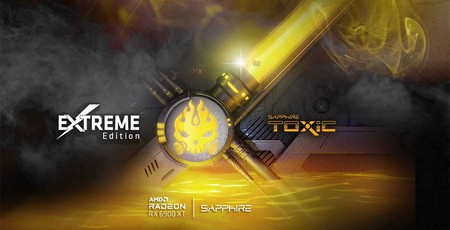 Sapphire has launched its fastest AMD Radeon RX 6000 series graphics card yet. The new Sapphire Toxic Radeon RX 6900 XT Extreme Edition was formed from the formidable Limited Edition model but adds the magic of a hand-picked AMD Navi 21 XTXH GPU with some complementary BIOS tweaks opening up more power and more MHz to overclockers than ever before. Key features of this Extreme edition are as follows:

These features come above and beyond the standard RX 6900 XT qualities such as 5,120 SPs, 80 ray accelerators, and 16GB of 256-bit DDR6 delivering an effective 16Gbps. For comparison the headlining 2,730MHz Boost Clock is over 15 per cent faster than its limited edition stablemate. Compared to reference design clocks it is more than 21 per cent faster.

The cooling solution looks to be the same as the AiO with the LE model, but is worth describing here as Bit-Tech hasn't reviewed that card. Sapphire's Toxic AiO includes a 360mm radiator with three dual-ball bearing 120mm fans. These circulate cooled liquid back to the pump which features a customised die-cast heatsink and twin heatpipes. Additionally, a hybrid fan in the pump block spreads cool air over the memory and VRM component areas. Another strength of the Toxic AiO is in its aRGB lighting flexibility. Users have control over the aRGB LED shroud, aRGB logo and aRGB backplate, while the GPU and AIO cooler are equipped with aRGB fans. Fire up the Sapphire Trixx software to control and sync all these light sources, and the aRGB is compliant with all the major motherboard makers when you attach via the 3 pin header.

Sapphire is shipping the Toxic AMD Radeon RX 6900 XT Extreme Edition now. The RRP is a hefty US$2,499, but I don't think they will sit for long on shelves.