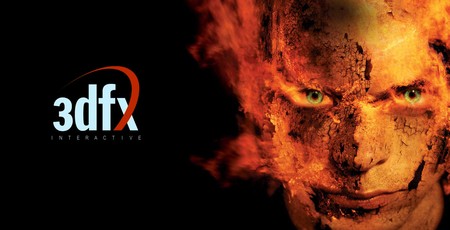 At the weekend, a mysterious tease that looked too good to be true appeared via a Twitter account – brandishing the legendary 3dfx logo. The @3dfxofficial account's first Tweet contained suspect grammar, "3dfx Interactive is coming back, 20 years later. Prepare for an major announcement regarding our return this Thursday", as well as a graphic poached from some web design community. Now the big reveal has been published, and it isn't very stirring, even to someone who once owned a Voodoo GPU all those years ago. 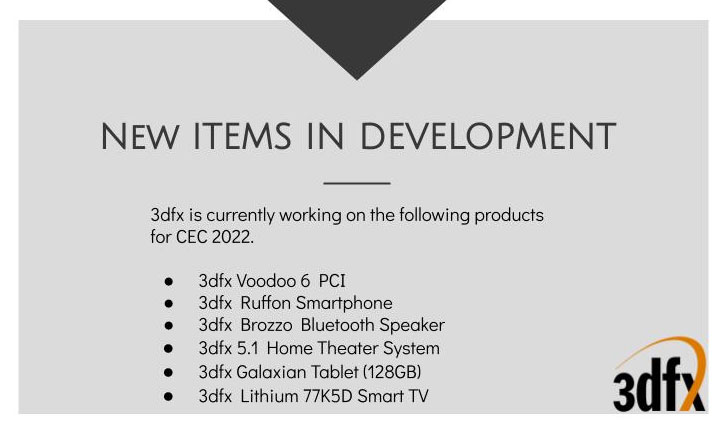 A few hours ago the 3dfxofficial Twitter account, as promised, trotted out its big announcement. Dressed up as a series of tech-corporate press release slide screenshots, the thread proudly claims to have the above "new items in development" for "CEC 2022". As well as a "3dfx Voodoo 6 PCI" graphics card, it is working on 3dfx branded items including a smartphone, Bluetooth speaker, tablet and smart TV. Reading through the list, I was expecting it to end with silicone wristbands, aprons, and beer mats featuring 3dfx branding. It reminds me of the bargain Lamborghini I once bought – an electric screwdriver.

The new 3dfx, said to be owned by investment company Jansen Products, explains that it isn't concentrating on graphics cards at this time as "we want to focus our attention on creating smartphones, appliances, smart TV's, Bluetooth speakers, etc". The firm goes on to project that its investments will cover 600+ projects over the coming year, serving 900,000 customers. Lastly, it claims that 10 per cent of its investments are currently in the video cards business, with the other 90 per cent spread across the previously mentioned tech accessories categories. I apologize if this news post is somewhat cynical, but based on what we have seen of the new '3dfx' so far, if you are looking for a new GPU industry entrant, you would be better off saving for an Intel DG2.