Corsair has announced the memory for the system builder who has everything: the Dominator Platinum Special Edition range, limited to just 1,000 kits in total.

Based, as the name suggests, on Corsair's existing Dominator memory modules, the Dominator Platinum Special Edition family is designed to be collectable as well as functional. Each kit is individually numbered, with the production run of 1,000 32GB kits being split equally between 2x16GB and 4x8GB options. 'Dominator Platinum SE modules are meticulously crafted with painstaking attention to detail,' crowed Corsair founder and chief executive Andy Paul at the unveiling, promising that 'these rather special and rare products will be enjoyed by an exclusive group of enthusiasts.'

The Dominator Platinum SE kits, Corsair has confirmed, will be made available in a choice of two finishes: the Blackout features a black anodised finish to the aluminium heatspreader, while the Chrome version is polished to a mirror finish. In either case, the modules themselves are claimed to be hand-screened for maximum overclocking headroom, feature a custom 10-layer printed circuit board (PCB) carrier and the promise of stability at speeds of 3,600MHz and beyond. 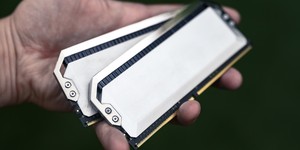 Alex converts these DIMMS from marketing lingo to the real deal.

Builds in some bling.