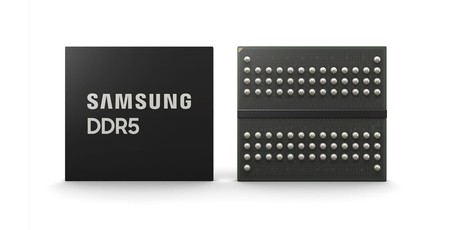 Samsung achieved an industry-first by shipping EUV DRAM in 2020. Today, it has begun mass production of the industry's smallest 14nm EUV DRAM. The importance of this latest innovation is that Samsung DDR5 DRAM becomes the densest available (five layer EUV), which is claimed to enable "greater performance and capacity."

Senior VP and head of DRAM product & technology at Samsung Electronics, Jooyoung Lee, said in a press release that Samsung has set an important milestone with its extreme miniaturization of DRAM thanks to application of its EUV 14nm technology. According to Samsung's own testing, the new DDR5 will boost productivity and tasks in the "data-driven world of 5G, AI and the metaverse" by as much as 20 per cent compared to previous gen DRAM. Efficiency should improve by a similar margin.

On the topic of performance, we have some more numbers shared, thankfully. Samsung says that, leveraging the latest DDR5 standard, speeds of up to 7.2Gbps are achievable. For reference, a standard DDR4 module will run at less than half that rate, at around 3.2Gbps. Last but not least, Samsung intends to refine its 14nm DRAM output to increase IC density to 24Gb. Such a feat could enable 768GB DDR5 DIMMs. Mainstream DDR5 DIMMs aren't expected in capacities above 64GB per stick, initially.

While we can all agree DDR5 is an attractive proposition for buyers of new systems that support it, it is rumoured that early adopter enthusiast motherboards will be available in variants – one version with DDR5 support, and another with DDR4. Asus has been spotted registering Prime Z690-A, Z690-P and Z690-V boards with 'D4' suffixes, for example.

The motherboard options might be welcome for the newest platforms like Alder Lake-S, for example, to keep build prices down, as a Newegg listing suggests DDR5 will command quite a premium at launch. A Twitter leaker has spotted GeIL Polaris RGB SYNC 32GB (2 x 16GB) 288-Pin DDR5 SDRAM DDR5 4800 (PC5 38400) Desktop Memory on Newegg for a rather pricey US$349.99. The same memory kit in Japan was subsequently spotted at JPY45,174. These sums convert to between GBP£250 and £300.