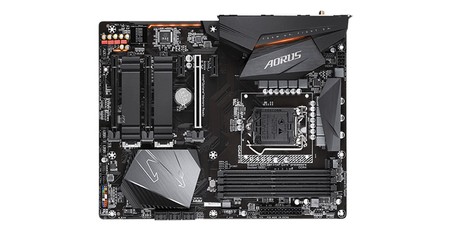 Intel's 11th gen Core desktop processors are due in the next few weeks. It is common knowledge that buyers of the new Rocket Lake (or RKL) processors will have a new selection of Intel 500 series chipset motherboards to choose - but what if you have a current gen Intel motherboard using the 400-series chipset? Both generations use the LGA1200 socket, but otherwise things aren't so clear-cut.

A few hours ago Intel published a support document about BIOS updates for Intel 400 Series chipset and upcoming 11th Gen Intel Core desktop processor-based system builds. First the good news: Intel motherboard partners are releasing new BIOS files for their Intel Z490 and H470 chipset-based motherboards to prevent any non-booting issues with the new processors. You will already have a grasp of the bad news from our headline, and it is simply that "Motherboards based on Intel B460 or H410 chipsets are not compatible with upcoming 11th Gen Intel Core processors." On its support pages Intel provides links to the BIOS update pages for all its motherboard partners, so you can look into your own particular situation. With the above digested and understood you might be wondering why Intel has decided not to work with partners on updates for the cheaper H410 and B460 products. The answer seems to be that these lower-end chipsets were build rather differently on 22nm rather than 14nm, and it is beyond the scope of a BIOS update to make them compatible with RKL. Acknowledging this to some degree is Gigabyte which has already updated its H410 motherboards portfolio by adding the H470 chipset to a couple of models.

Gigabyte's new H410M DS2V V2 and H410M S2H V2 use the H470 chipset and might be a good choice for accessibly priced motherboards supporting RKL-S when it arrives. So, Gigabyte's updates are a bit of a blessing, but also may cause confusion for customers speccing a new system and perhaps swapping out one of these new Gigabyte 400-Series chipset V2 boards from their shopping list ahead of checking out. Oddly Gigabyte's product feature pages note the new H470 chipset atop of the bullet points, but the spec pages still refer to the 'Intel H410 Express Chipset' being used…