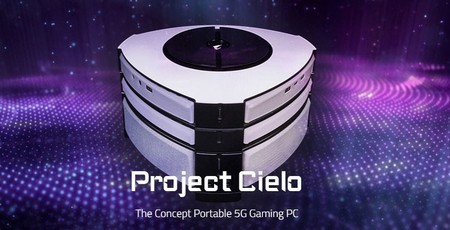 Out of the blue, Aorus has revealed its concept for a next-generation gaming PC, Project Cielo. It certainly looks different, with its triangular stacking structure, and it is claimed to be modular too. But is it really "the future of gaming"? As a concept PC, one can forgive Gigabyte / Aorus for being a little light on the details. There are really no tech specs to share. On first impression, I thought the three separate modular segments of the concept design may be; CPU, GPU, and power/storage – something like that. However, Aorus' vision and modular design isn't like that at all; the concept as shown consists of "the main system, the battery pack, and the Bluetooth speaker". Looking more closely at the images, those module descriptions apply from top to bottom. On top, on the main PC system unit, you will also see the angel cake-like wings of the 5G antenna. It seems like Aorus reckons 5G is highly important to the future of gaming PCs. "Compared to the traditional wired or 4G wireless networks, 5G makes PC gaming on the go possible by offering greater bandwidth, ultra-low latency and near-instant access to cloud gaming," it explains, in a press release about Project Cielo. So, will PC gaming rely more on great connectivity in the future rather than having exceptional processing power in the chassis – that seems to be the Aorus angle, which is a bit odd for the PC gaming wing of Gigabyte to promote. Why not use an easily luggable 5G tablet for such portable high-jinks instead, with a big bonus – it has a screen.

In the product description, Aorus reveals an even looser tie to current gaming PC concepts, "Users can combine any of the two parts and fulfil their needs for gaming, entertainment or other mobile applications." So this concept PC doesn't even need the bit that is the PC…