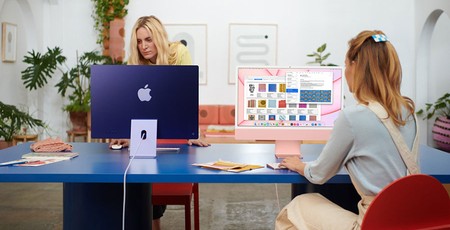 Apple broadcast its 'Spring Loaded' event a few hours ago, and as expected delivered a range of new iMacs built upon the M1 processor. As well as the claimed performance benefits over the Intel predecessors, Apple said that the new processor and logic board size allowed a drastic redesign of the iMac form. It is hard to deny the machines have been through a dramatic revamp, now a uniform 11.5mm thick, with a 24-inch 4.5K panel in place of the old 21.5-inch model (in a similar front viewed size thanks to reduced bezels), as well as the range of seven colours now available. Colour matched keyboards and mice are being made available. Perhaps the upgrade to Apple M1 processors is one of the least interesting upgrades here as we have seen this processor before and this is the same M1 chip with octa-core CPU, and 7 or 8 GPU cores, which featured in the refreshed laptops and Mac mini last November. In an iMac users' perspective the chip upgrade delivers up to 85 per cent faster CPU performance, and up to 50 per cent faster GPU performance, compared to the previous fastest iMac with discrete graphics. Apple says this new machine can "edit up to five streams of 4K footage, or one stream of 8K footage, without dropping a frame in Final Cut Pro".

Apple has configured the new iMac with a 24-inch 4.5K Retina display with narrow bezels around three sides but a very prominent chin. The display is said to deliver a P3 wide colour gamut and over a billion colours, plus 500nits of brightness, and Apple True Tone technology.

With an All-in-One you will want to get a good balance of components for all the tasks you need, due to the lack of upgradability and the neatness of the solution. Apple doesn't seem to disappoint here with its claim of the "best camera, mics, and speakers ever in a Mac," for this refreshed iMac. The camera is a 1080p FaceTime camera with purported good low light performance. A triple mic array is said to provide good environmental noise cancellation to keep your conferencing clear. Apple has managed to fit a six speaker setup in the chassis (4 woofers, 2 tweeters) for "a massive sound stage with strong, articulate bass and crystal-clear mids and highs". For connectivity, all the new iMacs feature two USB 4 Type-C Thunderbolt ports, Wi-Fi 6, and Bluetooth 5.0. The more expensive models add a pair of USB 3 Type-C ports to the rear, as well as an Ethernet port on the power brick.