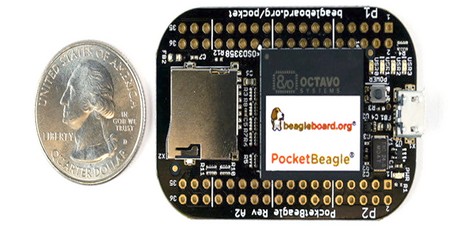 Embedded computing specialist the BeagleBoard.org Foundation has announced its latest single-board computer, an ultra-compact variant of its BeagleBone design dubbed the PocketBeagle.

Founded in 2008, BeagleBoard.org's first design predates the better-known Raspberry Pi by four years, but it wasn't until the group launched the BeagleBone Black at a significantly reduced cost that the design began to see considerable success in education and engineering circles. Unlike their fruit-themed competitor, the BeagleBoard and BeagleBone designs are all released under a Creative Commons Share-Alike licence, meaning they can be produced and modified by anyone for any purpose - including commercial use or reuse.

Following up the BeagleBone Blue launch earlier this year, which is a BeagleBone variant designed for robotics projects, the BeagleBoard.org Foundation has announced a new model: the PocketBeagle. Measuring 35mm by 56mm and just 5mm in height - before header pins are added for general-purpose input/output (GPIO), that is - the PocketBeagle is powered by the Octavo Systems OSD3358-SM system-in-packet (SIP) processor and includes a 1GHz ARM Cortex-A8 processor, an ARM Cortex-M3 microcontroller, SGX530 GPU with 3D acceleration, two 200MHz programmable real-time units (PRUs), and 512MB of DDR3 RAM.

In total, the PocketBeagle includes an impressive 72 expansion pins with the functions including various digital interfaces such as serial peripheral interconnect (SPI) and inter-integrated circuit (I²C) buses, high-speed USB, eight analogue inputs, 44 digital input-output pins, and power and battery access. Storage comes courtesy of a micro-SD slot, while the micro-USB port can be used in either host or client modes depending on need.

The PocketBeagle is available in the UK from reseller Mouser Electronics priced at £27.17 (inc. VAT). More information is available on the official product page. 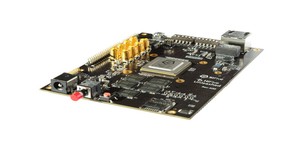 Price an issue, though.