Intel shows off Beast Canyon NUC 11 Extreme ahead of Computex 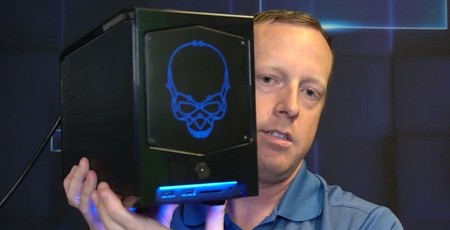 Intel was the first of the big three PC processor designers to hold its Computex 2021 keynote. It took place earlier today, but the name 'Innovation Unleashed' was probably more exciting than the event. Most of the 45 minutes was a recap of Intel's current situation and its strategy under Pat Gelsinger. The new bits from the event were mainly the launch of two more (4C/8T) 11th Gen Intel Core processors with Intel Iris Xe graphics to the current Tiger Lake U lineup, and (towards the end of the PC segment) where Steve Long showed off an Alder Lake processor packing laptop which he said already worked "beautifully," and was in the hands of partners right now. As per our headline, probably more interesting is the new Beast Canyon NUC 11 Extreme which appears to have been showcased ahead of the Computex at a sneak peek event to just a few journos. PC Mag was there, and you can see in the story feature image that Ryan Shrout, chief performance strategist at Intel, was showing folk the Beast Canyon. It is handy to see the 8 litre SFF near a human head for scale. The Intel NUC series has really grown in size and power with the latest illuminated skull effort. This design leverages a new Intel Compute Element card which is more or less a PC on a card (11th Gen H-series CPU here), and there is room for a PC graphics card too. While its 'Extreme' predecessor (5 litre) was limited to 20cm GPUs the new Beast Canyon has room for a GPU up to 30cm long – however we don't know any other critical dimensions that might need to be adhered to. However, it looks reasonable to assume you might be able to fit an Nvidia Founders Edition sized GeForce RTX 3060 or RTX 3070 in here. Other educated guesses about the platform would suggest that it will feature support for PCI Express 4.0 and Wi-Fi 6E, for example.

It is difficult to know if we will see / hear anything more about the Intel Beast Canyon NUC 11 Extreme during Computex this year. This 'sneak peek' might be it-  until we get near to launch / availability.