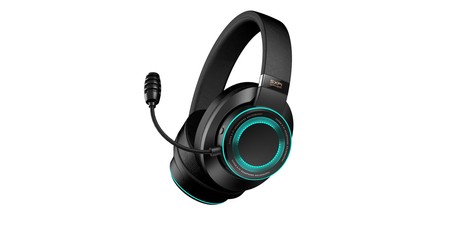 Creative has today launched the SXFI Gamer as a new flagship gaming headset and priced it at £114.99.

Described as ‘the ultimate weapon for complete gaming immersion and domination’, the SXFI Gamer benefits from the second generation of Creative’s Super X-Fi technology, which was announced at CES this year. Super X-Fi aims to replicate the listening experience of a high-end multi-speaker system within headphones, and this is made possible by the Super X-Fi Ultra DSP that’s a part of all SXFI products (all of which benefit from the Gen2 update, which was entirely software-based). Super X-Fi can also be personalised; using photos of your face and ears, it can create customised audio profiles for each user – fancy stuff.

Where the SXFI Gamer goes further is with the addition of Battle Mode, an audio profile designed to optimise Super X-Fi for FPS games. In Creative’s words, ‘environmental imaging, audio cues, distance projection and directionality are all enhanced with unprecedented levels of accuracy for the competitive gamer’s benefit, while preserving the essence of the award-winning holographic audio experience.’ The end result of the audio processing is delivered through 50mm neodymium drivers.

The audio processing is also enabled for the microphone. The so-called CommanderMic, which is detachable and has an integrated pop filter, leverages Creative’s SXFI InPerson technology, whereby an algorithm is used to help boost speech pick-up and suppress ambient noise.

Other features of note include removable memory foam ear cups with a soft leatherette covering, a Kevlar-reinforced USB Type-C cable (yep, really), and a customisable RGB lighting arrangement on the outer ear cups that can be tweaked using SXFI Control software. A four-pole 3.5mm cable is also provided for analogue connections.

‘Gaming has always been entrenched in our DNA, since the earliest days of Sound Blaster more than 30 years ago,’ crowed Creative CEO Sim Wong. ‘After we successfully created Super X-Fi, which critics have hailed as the holy grail of headphone technology, we did not rest on our laurels. We went ahead and spent a great deal of effort and resources to further improve Super X-Fi, especially targeting the gaming sector. The BATTLE Mode is here, and together with the CommanderMic and other features, the SXFI GAMER truly embodies the culmination of our very best technologies in a gaming headset.’

The SXFI Gamer is available to pre-order now (availability expected 24th July) and is priced at £114.99 including VAT. More information is available on the official website.