FSP has confirmed that it will be showing off a liquid-cooled power supply at Computex next week, which it claims can boost from 1.2KW under air cooling to 1.4KW when added to a liquid-cooling loop.

Designed in partnership with liquid-cooling expert Bitspower, FSP's upcoming Hydro PTM+ power supply is designed to sit very firmly at the top of the company's tree. Initially, its specifications seem relatively straightforward for a high-end power supply: 1.2KW rating, 80 Plus Platinum efficiency certification, LED lighting, and a silent mode whereby its internal fan is halted entirely at power draws of 600W and below.

Where the Hydro PTM+ differs from its rivals, though, is in featuring an integrated liquid cooling system. The first to enter mass production, FSP claims, the cooling system can be hooked to a computer's existing liquid cooling loop to keep the power supply's temperature down. When doing so, the company adds, the peak output of the power supply is shifted upwards: What is a 1.2KW supply on air becomes a 1.4KW supply under water. The design also meets 'the highest security and safety standards', FSP is quick to confirm, a necessity when playing around with conductive liquids and mains voltages.

At the same time, FSP confirmed the other new products it is to showcase at Computex 2017: power supplies with integrated 'smart' communication interfaces for Internet of Things (IoT) projects, what it claims to be the world's smallest 80 Plus Platinum certified 805W Flex power supply, and the 'Easy Redundancy Kit' DC-to-DC converter which converts two standard power supplies into a dual-redundant supply to boost systems' uptime.

More details on the FSP Hydro PTM+ can be found ahead of the event on the company's official product page. 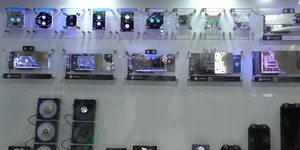 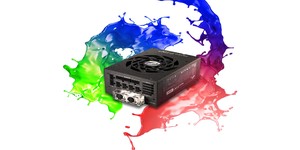