Seasonic has announced a new premium power supply family, boasting of a smart new design which offers a 0.5 per cent load regulation and double the hold-up time of rival PSUs.

Dubbed the Prime Series, Seasonic's latest power supply family spans a wealth of models from 550W to 1200W and boasting of 80PLUS Titanium or Platinum efficiency ratings depending on model chosen. Each boasts a fully modular cabling layout, hybrid fan control that sees the PSUs run silently under 45 per cent load, and boast of a zero-cable circuit board in order to improve reliability and airflow through the vented casing - though, as pictures of the PSUs innards show, the usual fan and AC input cables are present and correct, with the 'zero-cable' boast referring to the use of a PCB backplane for the modular connectors.

Where the Prime Series really gets clever, though, is in the quality of the power it spits out. Seasonic claims that all models in the Prime Series will offer load regulation to tolerances of 0.5 per cent - meaning that no line on the PSU should ever drift more than 0.5 per cent off its rated output in either direction. Another major selling point is extended hold-up, the time the power supply can continue to output its rated outputs when mains power is interrupted, which has been doubled from 15 milliseconds to 30 milliseconds to better survive brief power blips.

The company has confirmed that it plans to launch the Prime Series at retail, and that it is confident enough in its new design to offer a ten-year warranty as standard throughout the range. It has not, however, yet offered pricing information, though buyers can expect to be paying a premium over the company's previous designs. 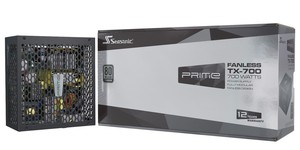