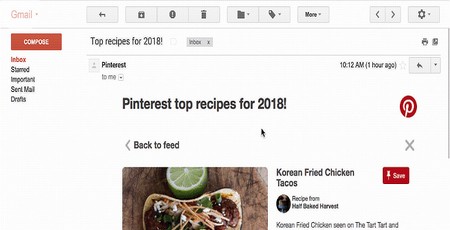 Announced back in 2015, Google's AMP platform was designed to speed up the loading of web pages on mobile devices by serving them as custom pages built from a restricted HTML subset and powered by JavaScript served directly from Google - a move which critics like Daniel Miessler have described as 'poisonous to the underlying concept of an open internet' by trading speed for turning Google from the site you use to find things to the site from which everything is served.

Despite criticism, Google has announced it is pushing its AMP programme to the next level by integrating it directly into its Gmail webmail platform - and in doing so is allowing senders to automatically update messages after they've already arrived in users' inboxes. 'Today, we're bringing the power of AMP to email through the Gmail Developer Preview of "AMP for Email,"' explains Gmail product manager Aakash Sahney in the company's announcement. 'This new spec will be a powerful way for developers to create more engaging, interactive, and actionable email experiences.

'For example, imagine you could complete tasks directly in email. With AMP for Email, you’ll be able to quickly take actions like submit an RSVP to an event, schedule an appointment, or fill out a questionnaire right from the email message. Many people rely on email for information about flights, events, news, purchases and beyond—more than 270 billion emails are sent each day! AMP for Email will also make it possible for information to easily kept up-to-date, so emails never get stale and the content is accurate when a user looks at it.'

The specification has been launched with, Sahney claims, interest from companies including Pinterest, Booking.com, and Doodle, while actual integration for end users will arrive in an update to Gmail scheduled for later this year.