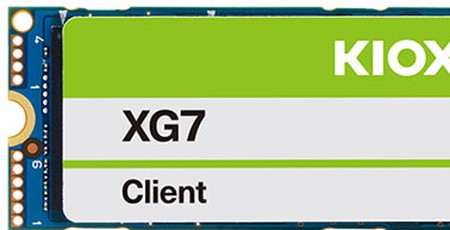 Kioxia, the company formerly known as Toshiba Memory America, has launched its first lineup of PCIe 4.0 NVMe SSDs for consumers. The new XG7/XG7-P client SSD series succeeds the PCIe 3.0 constricted XG6 Series with the headlining new PCIe 4.0 interface support. Most of the benefits delivered by the XG7 Series come thanks to the newer interface plus an all-new in-house controller design, which has been vertically integrated with Kioxia's own BiCS Flash 3D NAND memory.

With its hardware upgrades Kioxia's newest PCIe 4.0 NVMe consumer SSDs are capable of outperforming the XG6 Series with up to 2x sequential read speeds, and up to 1.6x sequential write speeds. No comparative IOPS figures have been provided at the time of writing. For reference, the Kioxia XG6 Series of consumer SSDs were capable of sequential reads/writes up to 3,180MBps and 2,960MBps, respectively. From these results we can roughly say the new XG7 Series should achieve sequential reads/writes of >6,300MBps and >4,700MBps, respectively. Those figures are a little bit behind what Samsung's 980 Pro PCIe 4.0 NVMe SSDs can achieve.

Other features supported by the XG7 SSD Series include NVMe 1.4 support and TCG Opal and TCG Pyrite security.

With their excellent performance, Kioxia is recommending its new XG7 Series to power users, and more specifically content creators, gamers, and professionals. These drives will be available in 256GB, 512GB, and 1,024GB capacities; and the higher capacity XG7-P Series adds 2,048GB and 4,096GB options to the family.

It is expected that these XG7 SSDs will be used by PC OEMs for upcoming laptops and desktops. Whether they will be sold as upgrades via the consumer retail channel is in some doubt. Kioxia hasn't been up front with deeper tech specs, pricing or availability but suggests you will be able to find out more at The Flash Memory Sumit which kicks off today and runs until Thursday.