COMPUTEX 2009: Marvell will smash the performance of other SSDs with its latest PCI-Express SSD which claims to run at a huge 2GB/s sustained throughput and can handle 200,000 IOPS from MLC NAND Flash.

The 88SE9480 is a quad channel PCI-Express to S-ATA controller that connects to four 88SS8014 SATA to NAND Flash controllers, which feature wear-leveling technlogy and ECC hardware. The product is clearly aimed at server and workstation class environments, but when we asked Marvell if the 88SS8014 S-ATA to NAND flash would be available as a purchase on its own for 2.5in hard drives the rep explained it was possible but there were no concrete plans.

The current pre-production hardware is separated over two cards right now, with S-ATA connectors linking them together, and we can clearly see the space for four DDR2 SoDIMM memory slots on the upper card for cache, however no specific sizes supported were yet given.

Fancy some Marvell marvel? Let us know your thoughts, in the forums. 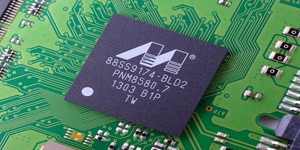 OCZ bolt 1 SSD, 2 controller chips and one RAID chip to a single PCB. OCZ Technology has launched its first SSD to retail under $100 - the 32GB Onyx. The question remains - is it cheap enough for the storage space on offer?