Designed as a next-generation replacement for perpendicular magnetic recording as used in today's hard drives, HAMR holds the potential for 3.5in hard drives holding as much as 60TB. That, Seagate is quick to point out, would mean more bits in a square inch of hard drive platter than stars in the Milky Way.

As the name suggests, HAMR supplements traditional magnetic storage technologies by first heating the area to be magnetically flipped with a small laser. The result is a bypassing of the superparamagnetic effect, a phenomenon in which sufficiently small magnetic particles decide to randomly change state - turning your carefully stored data into so much gibberish.

The technology has been in the pipeline for quite some time: the first patent describing the use of heat to improve the stability of magnetically recorded data dates back to 1954, while the 1980s saw the launch of the HAMR-based magneto-optical drive before it was superseded by writable CDs. More recently, Fujtisu announced a HAMR-based head element in 2006 which it claimed could potentially lead to terabit-per-square-inch areal densities.

Seagate is now claiming to deliver on Fujitsu's six-year promise. A prototype HAMR implementation created by the company as a proof-of-concept platform for the technology shows serious promise: at a linear density of two million bits per inch for an overall density of 1Tb per square inch, the drive boasts an areal density around 55 per cent higher than PMR's theoretical 620Gb per square inch limit.

As a result, the first-generation commercial HAMR products can be expected to double hard drive capacities. That means desktop drives holding up to 6TB, and laptop drives holding up to 2TB. Seagate promises that HAMR will scale rapidly, however, with its upper limit sitting somewhere around five to 10Tb per square inch. As a result, by the time HAMR reaches end-of-life, we should be enjoying 3.5in hard drives with between 30TB and 60TB of storage space.

'The growth of social media, search engines, cloud computing, rich media and other data-hungry applications continues to stoke demand for ever greater storage capacity,' claimed Mark Re, senior vice president of heads and media R&D at Seagate. 'Hard disk drive innovations like HAMR will be a key enabler of the development of even more data-intense applications in the future, extending the ways businesses and consumers worldwide use, manage and store digital content.'

Sadly, Seagate is somewhat quiet on a launch schedule for its HAMR-based drives, saying only that it is planning the first commercial HAMR drives for launch 'later this decade.' 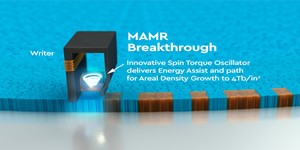 Boasts of better reliability than HAMR.