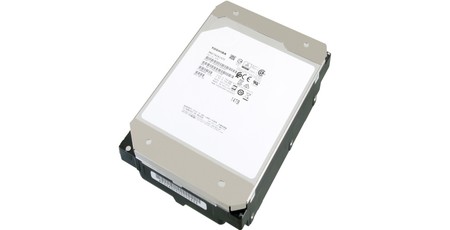 Shingled Magnetic Recording (SMR) is a remarkable technology, borrowing tricks originally developed for solid-state storage devices to boost the areal density - and therefore storage capacity - of traditional magnetic hard drives. Its clever tricks come at a cost, however: SMR drives need special handling in order to avoid serious performance issues, to the point where their best performance is available only to those with particular workloads willing to use special file systems tailored to its intricacies.

Toshiba's MG07ACA 14TB 3.5" hard drive, though, avoids these problems by ignoring SMR in favour of standard Conventional Magnetic Recording (CMR) - meaning it is suited to any workload without the loss of performance associated with SMR. Toshiba's trick to hit this capacity without SMR is twofold: The company has managed to pack a whopping nine platters into the drive, which are then surrounded by helium rather than air - a trick originally introduced by rival Western Digital's HGST subsidiary - to reduce drag and improve heat transfer to the case.

The new models, which include the 14TB version and a 12TB eight-platter version, are up to 40 percent higher capacity than the company's previous drives and offer up to a 50 percent improvement in power usage as measured in watts per gigabyte (W/GB). Both models include laser-welded housings to keep the notoriously tricksy helium inside, a SATA 6Gb/s interface, and a 7,200 revolutions per minute (RPM) spindle speed.

Toshiba has indicated that samples of the drives have begun to ship now, though is as yet silent on commercial availability and pricing.