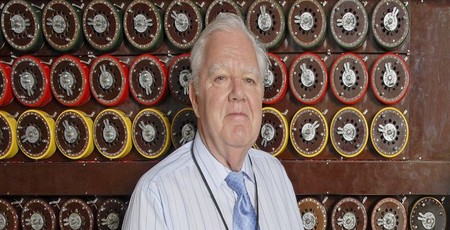 The National Museum of Computing (TNMOC) has announced a fund-raising effort to rehouse the Turing Welchman Bombe Rebuild Trust's recreated Bombe in its own facilities, as close to its relative Colossus as possible.

Currently housed in the nearby Bletchley Park museum, the recreated Turing-Welchman Bombe was built by the Trust as a means of demonstrating the functionality of the long-lost original device built during the Second World War for the automated electromechanical discovery of the settings used by Axis powers on the Enigma cryptography machines for secure communications. Following discussions with Bletchley Park, though, the Trust has been looking for a new home - and hopes it has found one in TNMOC, located on the Bletchley Park grounds and already home to the Colossus machine which performed much the same task for the Lorenz cipher machines used by the German High Command.

'After careful consideration of the options, TWBRT Trustees approached The National Museum of Computing which agreed to host the Bombe exhibit,' explains Trust char John Harper of the decision. 'We are delighted with this solution and welcome the opportunity to remain part of the overall visitor attraction at Bletchley Park. Our team of volunteers is looking forward to continuing to demonstrate how the Bombes made their vital contribution to Bletchley Park's wartime role in the new venue. We thank the Bletchley Park Trust for their co-operation over the years and are pleased that the story of the Bombe will remain very much part of the story that it tells.'

'To house the reconstructed Bombe close to the Colossus Rebuild makes a lot of sense from many perspectives,' adds Andrew Herbert, chair of TNMOC. 'As a pre-computing electro-mechanical device, the Bombe will help our visitors better understand the beginnings of computing and the general thought processes that led to the development of Colossus and subsequent computers. The story of the design of the Bombe by Alan Turing, the father of computer science, leads very appropriately into the eight decades of computing that we curate. Even the manufacture of the Bombes leads directly to British computing history - the originals were built by the British Tabulating Machine company (BTM) in Letchworth, which later became part of ICT, then ICL and now Fujitsu.

'A further benefit of the relocation is that as working reconstructions both the Bombe and Colossus need constant maintenance, skills for which TNMOC volunteers are globally renowned. There will be a very real synergy of the complementary skillsets of the Bombe and Colossus teams who have a profound understanding of the technologies available to those astonishing code-breaking pioneers.'

The move is planned to take place within the next few months, but the Museum - which is entirely reliant on private donations, entrance fees, and sales for its funding - requires £50,000 to move and install the Bombe and prepare its gallery at the facility. To that end, Museum trustee and co-founder Kevin Murrell has set up a crowd-funding page requesting donations, which at the time of writing had raised £1,105 towards its £50,000 goal with 28 days remaining.

TNMOC gets £50K for emulator development

Part of the Learning Programme.