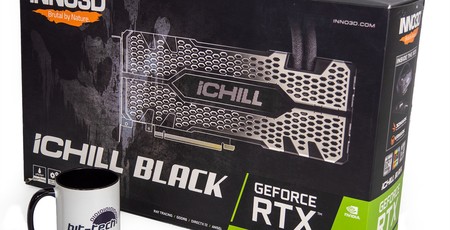 The Nvidia GeForce RTX 2080 Ti remains the fastest gaming GPU in the world even though it was launched more than 18 months' ago. A multitude of partners have tried to outdo the sleek Founders Edition, with little success, though many have been faster due to incrementally higher clocks. Inno3D's best effort, the iChill Black, eschews traditional air cooling for an all-in-one liquid-cooling solution. 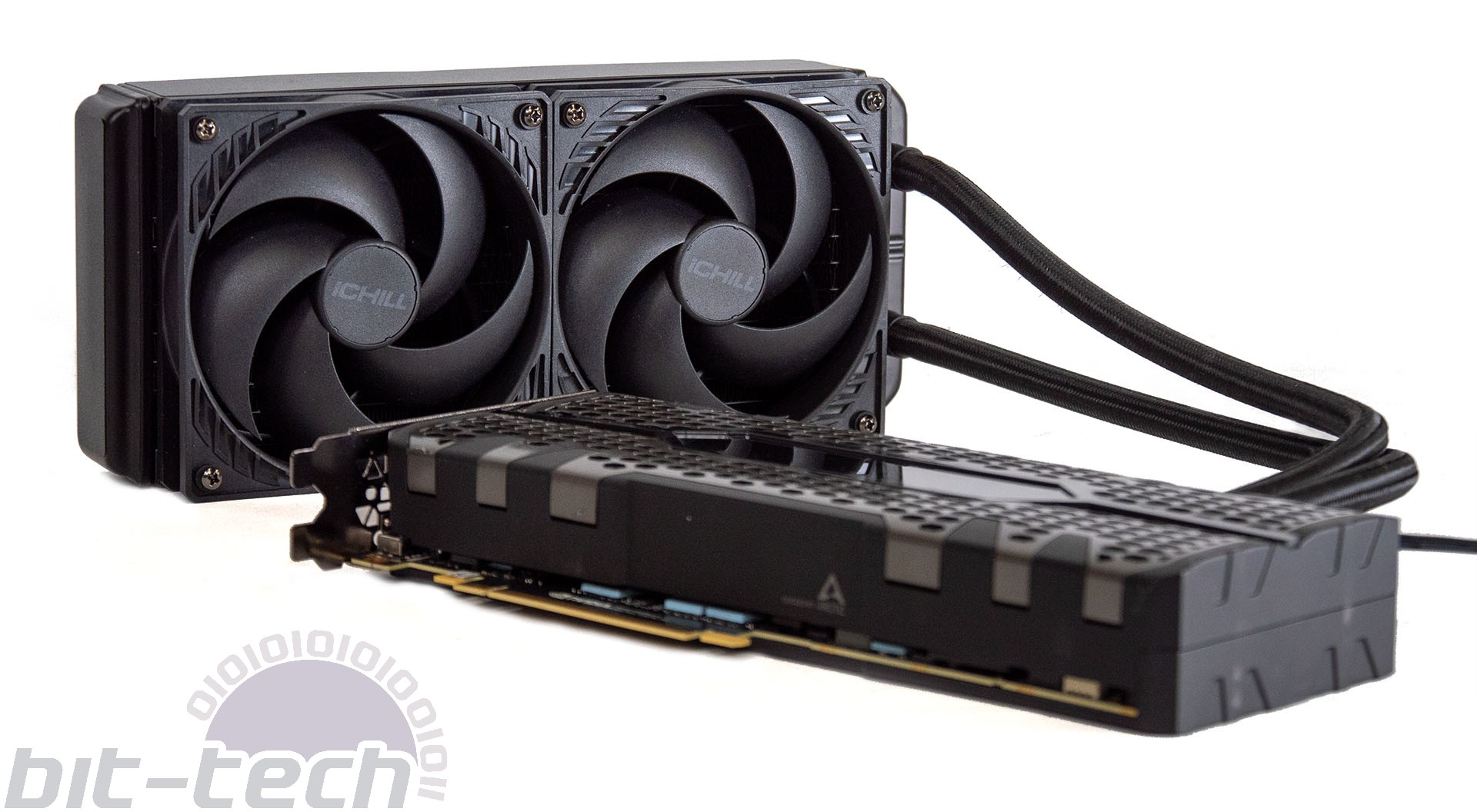 Having the cooling effectively located externally on a 240mm radiator and dual 120mm fan assembly enables Inno3D to adhere to a strict dual-slot form factor for the card itself, which uses an Asetek-designed cooling system for the RTX 2080 Ti GPU, VRM and memory components.

There's sufficient cooling present to increase the TDP from the usual 250W present on Founders Edition cards to 300W here, plus another 35W for USB Type-C. A decent uptick, to be sure, but it's not reflected in substantially higher clocks. The core has a rated boost speed of 1,695MHz - up from the FE's 1,635MHz - though these numbers are a guide only. The sample card managed a solid 1,920MHz boost during benchmarks, meaning in-game performance ought to be range-topping. 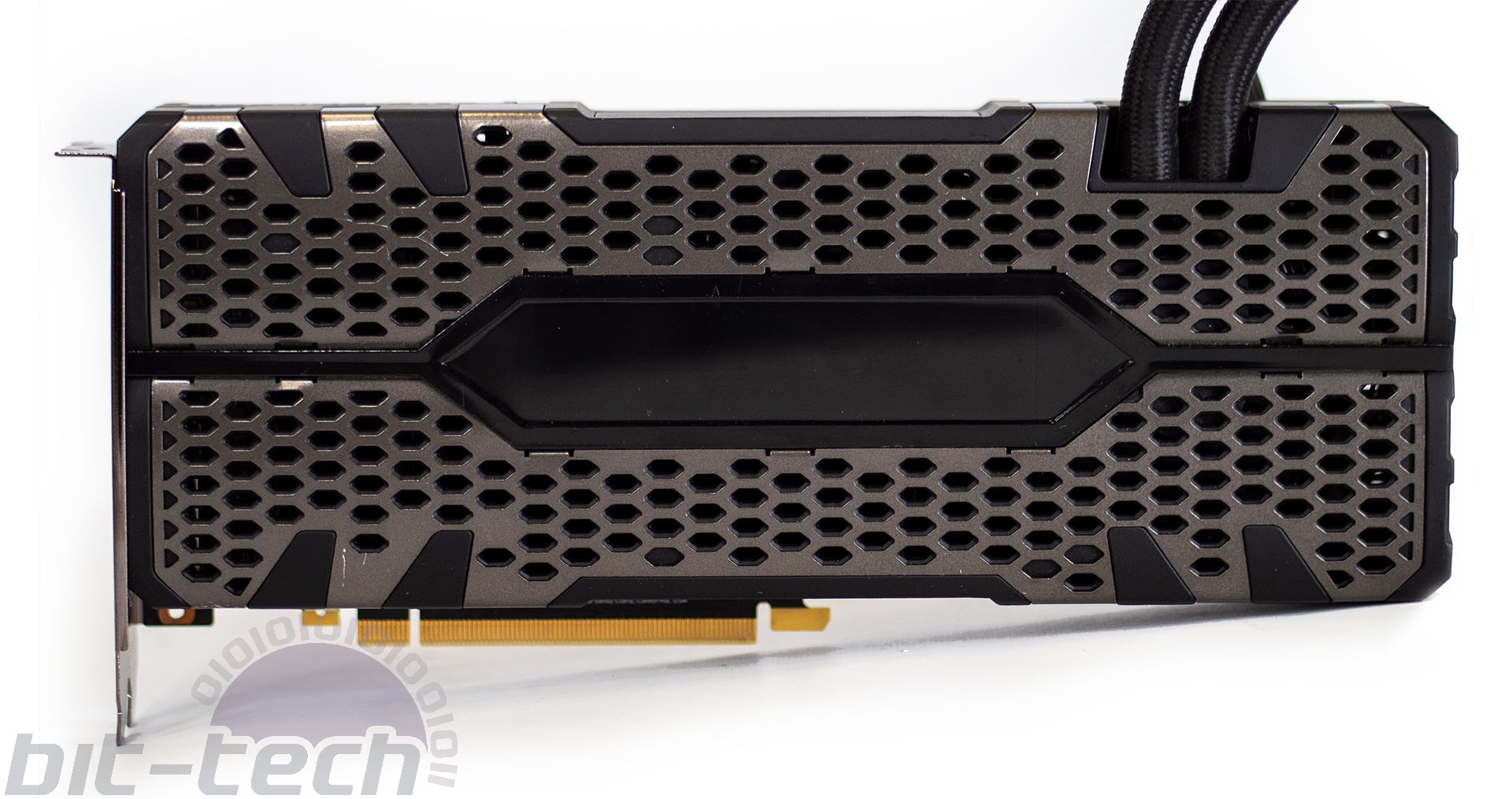 Build quality is good on the minimalist design, with no squeaks or rattles on the two-tone finish. Having no large fan on the card itself clears space for a central TFT section that displays a number of key parameters such as fan speed, temperature, GPU and memory frequency, amongst others. It ideally requires users to mount the card vertically because it cannot be readily seen in the usual orientation.

400mm of tubing between card and cooling is enough for even the largest of chassis as well as multiple locations. The radiator is actually closer to 280mm wide and 60mm thick, including fans, so be sure to have adequate space in the case. Inno3D pays attention to detail by having the fans switch off at low loads, and even when on, the transition between states is smooth - it doesn't exhibit the revving found on some air-cooled designs. The card itself measures 272mm long and 112mm wide, which makes it look reasonably small in a decent-sized enclosure. 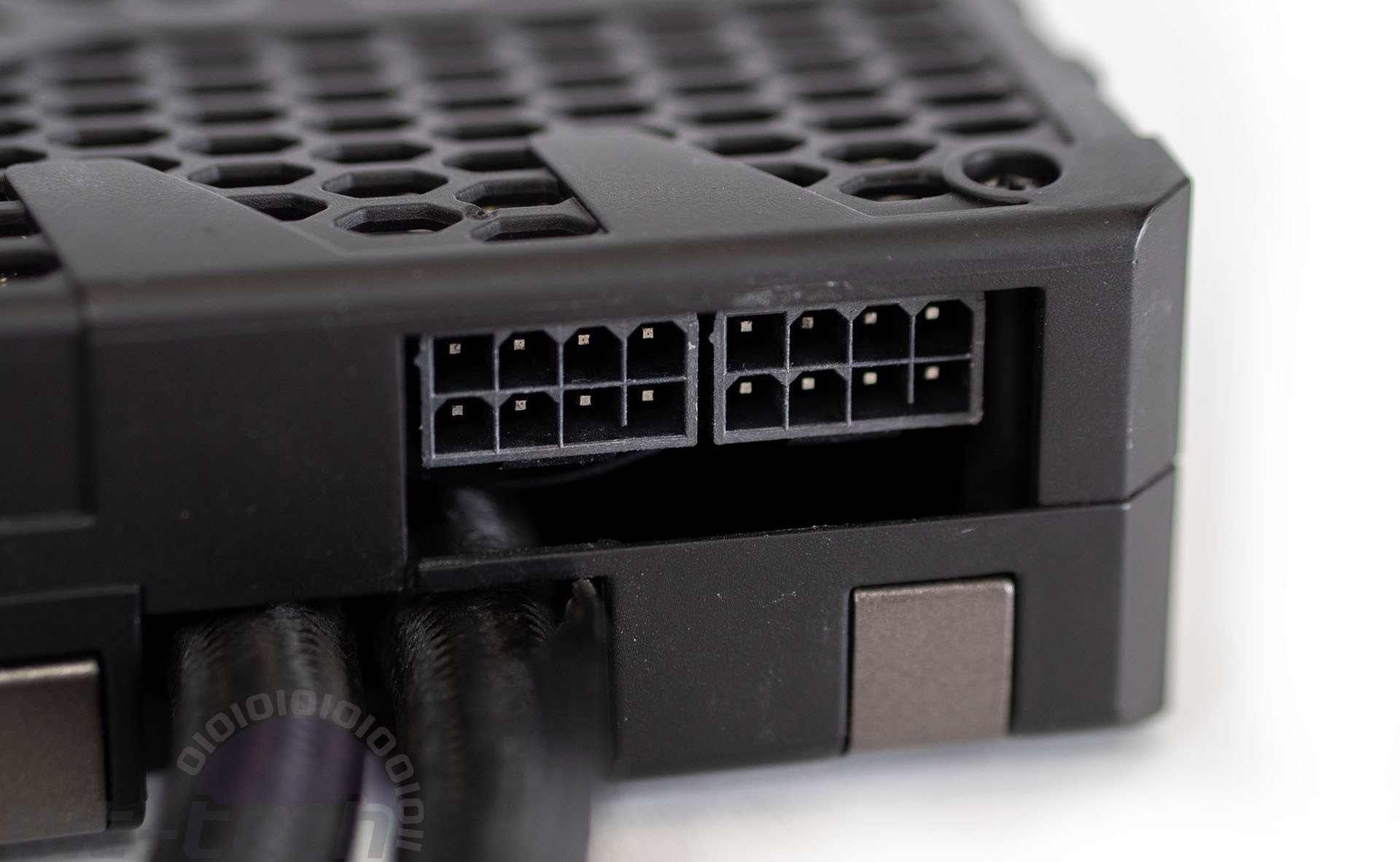 It's clear the design and cooling are far removed from the Nvidia Founders Edition, so it may surprise you to learn that the iChill Black does use the original PCB, albeit with higher wattage limits. We're okay with that, as it is a proven design, though in keeping with the original, the 11GB memory is left at stock speeds of 14Gbps. If any card was crying out for 16Gbps RAM, it's this one.

The plastic backplate completes the look, and it's certainly more for aesthetics than performance, because it doesn't become overly warm to the touch. Power is sourced by the regular combination of dual 8-pin connectors. Looking around, the card doesn't feature dual BIOSes, which could be handy if you wanted to install a higher overclocking profile by default. We'd recommend Inno3D implement one on this premium model.

Alongside the aforementioned colour TFT screen, there's also RGB lighting on the side, controllable by the basic TuneIT utility or motherboard software.

It's a shame that Inno3D hasn't covered the SLI fingers on the top-left; they stick out like a sore thumb against the black of the shroud and the rest of the test PC.

A further nod to the reference provenance is provided by the outputs, which exactly match the Founders Edition in specification and location. There's three DisplayPort 1.4, a single HDMI 2.0b, and the USB Type-C that is sometimes removed by partners. No surprises here, then.

Backed by a three-year warranty, the card's bundle also includes an iChill mouse mat and complementary copies of 3DMark and VRMark.

Going down the all-in-one liquid route pushes price up to a suitably eye-watering £1,299, which sounds stupefying, but the plain truth is that the cheapest RTX 2080 Ti cards are north of a grand. Other partners' premier models - some watercooled, some not - fetch equivalent money, so this is very much a premium product.