Dishonored 2 clicked with me in seconds. It's mostly the feel of it. The slick sensation of vaulting over a wall, sliding under a table or dashing down a corridor. With Dishonored 2 putting this much care into the way you move around, I couldn't help but be excited for what came next.

What came next for me, failing at stealth fairly hard during my EGX 2016 hands-on, was some combat. I'm playing Emily Kaldwin, and although I'm told that Emily favours the stealthy option, you couldn't tell when I started cutting loose - a quick use of her Domino power tied the fates of two guards attacking me. When I hit one with a grenade, the other pinwheeled away too, hurt by the blast as if he'd held the explosive to his own chest. Making the most of that aforementioned agility, I was able to quickly cut off enemies' routes of escape or dash to safety myself. Most of the guards never stood a chance. The only thing evening the odds in their favour were the Clockworks. These guardians stand at various points in the giant clockwork mansion players are tasked with infiltrating, and they react to noise. If you make a noise they come alive, hunting you down mercilessly. They can kill you in a single strike and move faster than you, so they're an enemy to be respected and feared, but they can be killed easily from behind. They encourage stealthier play, or the judicious use of the game's grenades and exploding pistol ammo. Destroy their head and they can't see you anymore, hunting entirely by sound instead.

In this playable hands-on, if anything the problem is that I feel too powerful: I don't have to worry about the amount of chaos that will occur if I leave a stack of severed heads laying in a hallway, and similarly if it's anything like the hands-on for the original Dishonored, it will have been tweaked to give me access to a 'safe' set of powers that mesh together well to give me the best chance of success. Regardless, there's an unmistakeable feeling of quality to certain games, and Dishonored 2 has it. The way you can scale one of the mansion's moving walls without clipping into anything and the easy way you slide across the floor between the swords of attackers mid-fight all reinforce the feeling that this is one hell of an adventure game. Bit-gamer alumni Joe Martin was (and still is) a fiercely enthusiastic fan of the original Dishonored, and I can see myself falling in love with the sequel with that same enthusiasm. 2016 has been packed with stellar AAA releases, but this looks like it's going to stand shoulder to shoulder with any of them in terms of quality. Keep an eye on it. 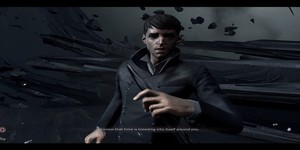