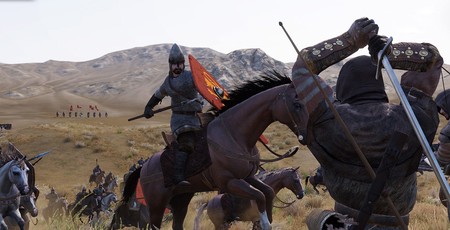 I think the most surprising thing about Mount and Blade II’s Early Access launch is discovering just how many people love Mount and Blade. Within days of launch the game stormed its way to the top of Steam’s Global Top Sellers. It has remained there for the last few weeks, racking up over 60,000 Steam reviews. Its concurrent player count is larger than that of Doom Eternal. It is enormously popular.

I wish the game itself was as surprising. Don’t get me wrong, Mount and Blade II is a solid follow-up to the first game, boasting a brand-new engine with much prettier battlefields, alongside a bunch of new systems designed to fill out areas where the first game felt a lacking. But it’s also very similar to the original game, to the point where it doesn’t seem to have solved any of the original’s core problems.

For the uninitiated, Mount and Blade II can be thought of as a hybrid of Total War and Skyrim. Unlike Skyrim, however, you’re not a chosen one destined for greatness. In fact, you’re nobody at all, just another watery skinbag populating the game’s faux-Medieval world of Calradia. You start out the game with precisely three things, a horse, a decent sword arm, and most importantly of all, ambition. The game has two distinct phases. The first is the campaign map, which is where the Total War similarities come into play. Here you move about the world of Calradia, visiting villages, towns and cities and encountering a wide range of NPCs travelling the world on their own missions and errands. If you enter a town or attack one of the AI’s roving bands, then the game switches to a third-person mode, letting you wander around the settlement freely, or do battle with whoever you’ve decided to send back to the mud.

Decision-making is crucial to Mount and Blade’s design. It’s entirely up to you how you make your mark on Mount and Blade’s world. Obviously, the game is primarily designed toward combat. But even here there are a bunch of different options open to you. You could choose to chase down bandits and raiders or become one yourself, raiding villages and trade caravans for plunder and profit. You could become a champion of the arena, visiting cities and taking part in lucrative melee tournaments. You could ally with a local lord, and help fight their wars for them in exchange for a stake in the loot. Eventually, you may even become a lord yourself, able to use the game’s new currency of Influence to gain territory and sway political votes in your favour. What’s most fascinating about Mount and Blade’s approach to this is the hand you have in everything. Each member of your warband is individually recruited, then upgraded to become a more advanced soldier. If they’re a cavalry man, you’ll also need to buy them a horse. If they die on the battlefield, they’re gone forever.  You can also recruit companions who act as key figures in your army and have unique inventories that can be tinkered with. If you want to talk to a lord, you need to track him down in the game world. And the game doesn’t sit idly by while you do this. It chugs along under its own momentum. Nations are constantly warring with one another, with territory changing hands with the speed of a professional juggler, and nobles constantly being killed or captured by their enemies.

It’s this social and strategic simulation that is the core appeal of Mount and Blade. And the sequel deepens that simulation in some interesting ways. Primarily, trading is much more advanced. You can make a killing by listening to trading rumours and taking the relevant goods to the right location, or by selling important items like grain in war-torn areas. Once you’ve earned a chunk of coin, you can purchase individual businesses and scoop the cream off the top, becoming the Medieval equivalent of Ray Kroc. In addition to this, Bannerlord has a legacy system that means if you get married and have kids, then when you die your son or daughter takes over your faction. All of this is worthy of celebration, but I can’t shake the sense that Bannerlord doesn’t represent a huge advancement over the original. Part of the problem is the sheer length of time Bannerlord has taken to develop. The engine, for example, looks miles better than the original game, with gorgeous lighting and much prettier looking battlefields and cities. But it’s also some way behind the current zeitgeist. Characters look soulless and dead-eyed, which is a big problem in a game that involves interacting with so many characters.

Indeed, one of Mount and Blade’s core issues was its rather staid world design, and for me Mount and Blade II doesn’t do enough to solve this. As with the character models, the writing is flatter than the Russian steppe, and I don’t think there’s enough distinction between the individual factions. In the absence of a strong script, the game would benefit significantly from a personality system like those of Crusader Kings or Total War: Three Kingdoms. It needs something to give you a sense of what the people you meet are like, and make them feel less like a conveyor belt of marble-eyed clones. Finally, combat is very similar to the original Mount and Blade, which is to say stiff and clunky. This is less of a problem when you’re in a large battle, as the spectacle of seeing several hundred soldiers smash into each other more than makes up for the somewhat robotic animations. But when you’re fighting in the arena or in a smaller skirmish (which is most of your early game), Bannerlord comes off poorly compared to other duelling games like Chivalry or Mordhau.

Of course, Bannerlord is still in Early Access, with around a year left of development before a full launch, so there’s time yet for it to sand down those rougher edges, and possibly see one or two big new features. If you liked Warband, you could probably jump in right now and have a rollicking time. If like me, however, you struggled with the inherent clunk, Bannerlord in its current state doesn’t quite succeed in eliminating this, so you might want to wait and see.