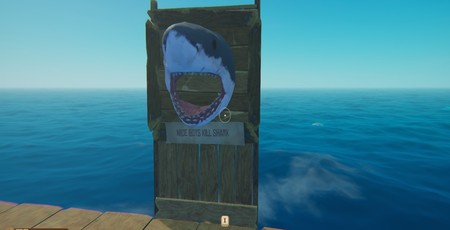 Raft's first 20 seconds are like the cold open to a hot new science-fiction show, more questions than answers as the player awakens on a tiny square in the middle of an endless ocean, armed with nothing but a hook and a desire to survive.

Raft is another one of those survival games you've heard so much about, but its inversion of the standard tropes make it a compelling offering: You have very little control of the titular raft, and instead the resources you need to survive float lazily towards you. Sometimes there's another raft for you to board for supplies, or an island from which you can try to quickly scavenge seeds, dirt, or scrap from. Later, you'll even gain the ability to build a paddle, anchor, even sails for your tiny boat. However, by and large the raft is a force beyond your control, and the best you can do is hope to influence it. Most survival games feature a crunch point - the moment when you break the back of the game's systems and move from surviving to thriving. Smart players will do this quickly, identifying a good location to make their stand, or if the game isn't procedurally generated, going through a series of motions to ensure the highest chance of survival.

This is how survival games work.

However, with Raft things often work out slightly differently. You're in a flow of debris which lazily rolls past the ship, and anything you want has to be fished out of it, whether by hook or by hand. Raft is one of the first games that I've played that understands that a lot of the survival genre is about gathering resources, and puts some effort into gamifying that collection. Sometimes, this leads to moments of frustration, but most of the time the little moments of elation as you snag a barrel of supplies are a world away from battering the nearest tree with your fist/axe/whatever you use in the current survival game vogue. What you collect is used to enhance the raft you travel in in a variety of ways that make your path through the ocean easier: This could be making it larger so you can fit more things on it, adding areas to grow and cook food, or just stringing nets up everywhere around the outside to passively collect the rubbish you float past. Want to make a houseboat, several stories high? You can do that, but are you sure those resources wouldn't be better spent elsewhere?

Mechanically, it's this that sets Raft apart from its competitors and offers a unique experience. Thematically, the fact that it's set in the middle of an ocean makes it appear different, but even Subnautica, one of the kings of the genre that is also set in an endless ocean, allows you to slowly warp the environment to your will. Here, all you can do is improve your method of transportation, which has no effect on the world around you, beyond making the journey easier. At the end of the day, while you may be able to start growing your own food, optimise your water production, or produce nets to catch the debris floating past, all it really does it make your survival a little easier - there are so many elements are play here that the core difficulties persist.

The biggest difficulty? The giant shark that keeps attacking your raft, of course. This shark is persistent and tireless, constantly circling your raft to nibble on anyone stupid enough to jump into the water, and occasionally inviting himself on board to chew on some of the decking. He can be easily repelled with a spear, but that requires you to craft a spear and drop everything you're doing as soon as he attacks to give him a solid prodding. Every now and again, with some persistent effort of your own, you can even kill the shark before harvesting its body for meat that you can eat, in addition to its head which you can use to make a fetching trophy to mount upon a wall — if you have a wall. However, like death, taxes, and the yearly update of Call of Duty, it's inevitable that another shark eventually rears its ugly head and starts snacking. This shark, alongside your constant need for food and water, and the bastard seagulls that eat everything you try to plant, are the constants that set the tempo of the game. They never go away, they never get much easier. This means that Raft is, even at this early stage, surprisingly complete. However, it also means that I have some doubt about what else can be bolted onto it. This isn't a game that can easily weave in a new expansion, for example. However, this is a fresh survival experience in a genre that has been lacking in interesting ideas, and if survival is your cup of distilled seawater, this is a Raft you can put your faith in.

Technically, the game is really polished for where it's at too. There were few bugs, and the multiplayer has seamless drop-in/out coop. I guess you could call it a... survival raft.

Actually maybe don't; that joke doesn't even make any sense.