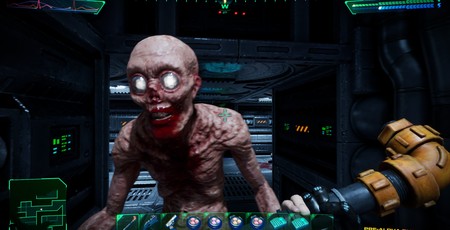 I’ve never considered System Shock to be a survival horror game. It is, of course, a game about surviving a horrific situation, but I’ve always thought of it as an RPG first, a game about coming up with your own solutions to the problems you’re presented with. While it may have been scary in its day, time has worn away much of the original’s atmosphere, especially if you compare it to the original DOOM or Shock’s still-terrifying sequel. Those games still carry a palpable sense of tension. System Shock’s bleepy-bloopy sound effects and unconvincing MIDI Soundtrack do not. Nightdive’s Remake is a stark reminder – System Shock is a survival horror game. That’s the main thing I gleaned from the couple of hours I spent with the demo, released for a fleeting 48 hours in the wake of last week’s Game Awards. Nightdive’s overhaul of System Shock takes the skeleton of the original game, updates the visuals and refines the systems, then drenches the whole thing in an atmosphere so thick it could choke a hippo.

A brief caveat, it’s been a while since I played the original System Shock, so it’s difficult for me to say precisely how authentic the remake is. But having watched some of the original gameplay footage on Youtube, the contents of the demo appears to be largely faithful in terms of story, weapons, enemies and so forth. Specifically, the demo allowed us to explore Citadel Station’s medical deck, where your indentured hacker protagonists awakes after six months of healing cryosleep to discover the station has been overrun by a virus unleashed everyone’s favourite AI matriarch, SHODAN. With nothing but a lead pipe and a couple of cybernetic implants to your name, you need to figure out precisely what’s going on, and how to stop it.

No doubt you can see this from the screenshots, but Nightdive’s remake looks fantastic, paying its dues to the original game’s vivid colour palette while doubling down on the game’s survival horror theme, wreathing everything in viscous shadows. The addition of dynamic lighting and shadow makes a huge difference to the atmosphere of the game. Monsters can now truly lurk in the dark. More than once I walked past a shadowy alcove only to have a thing reach out and try to tear my face off. I also love how everything has a slightly pixelated texture up-close, a stylistic choice that lets you see that twenty-five-year-old game if you look closely enough. Nightdive has also retained the computer readouts and dashboards that cover the walls, which glow and flicker in the dark as you explore.

While the surface has been changed considerably, the core of System Shock remains the same. The level design still constructs its spaces in a very cubic fashion. I was ambivalent about this at first. It seemed a mistake not to modernise the game’s architecture as well as the overall visual style, given how well this worked for Resident Evil 2. As I explored, however, I found myself appreciating the complex, open-ended mazes of Looking Glass’ original design. It feels you’re traversing a giant, 3D circuit board, and that’s fitting for a game where the lines between reality and cyberspace are not always clear. What you can’t see from the screenshots, of course, is what the game sounds like, and how it feels. Regarding the former, System Shock has ditched the low-key ambient soundscape, all distant engine rumbles and eerie whines. Sound effects have been carefully thought about too. I especially love System Shock’s excellent sci-fi doors, the way they whirr and bleep and hiss as they slide open. They’re very satisfying to interact with, and this satisfaction extends to the broader feel of the game. Movement is wonderfully deliberate, in a way that really highlight’s the game’s survival horror sensibilities. Oh, and you can lean around corners, which is particularly useful for scoping out the Cyborg enemies that like to ambush you from the sides.

The one area I’m unsure about is combat. Swinging your lead pipe at enemies is not especially gratifying. System Shock is no Condemned, that’s for sure. Ranged weapons fare better. The Sparqbeam zaps enjoyably, and the Magnum 2100 has a lovely reload animation. Still, given the game’s weighty movement, the weapons need to feel more impactful and dangerous to match that. Also, this may simply be because it’s the first level, but I found the combat to be quite easy, which undermined the tension somewhat. The robots and mutants that crawl the corridors of the medical deck don’t put up much of a challenge, especially if you compare them to the rather more lethal mutant drones of Shock 2. The Cyborgs are more dangerous, but if you clock their lasers before turning a corner, you can usually see them off without taking damage.

Such problems are still very fixable, however, and I had a lot of fun peering into those early corridors of Citadel Station regardless. After a long and, it’s fair to say, difficult development, I’m glad that Nightdive were finally confident enough in their work to place some of it in player’s hands. If the rest of the game is on the same par as the demo, I’d say that they have good reason to be confident.